Andrei was a COSMORUS satellite engineer who worked alongside SOMBRA in constructing a satellite. He had blond hair and blue eyes, and was wearing his white lab coat at the time of his death.

Andrei was found at the top of Mount Khan with his body partially sliced in half by a blade. According to Angela, the slice from the shoulder to the hip was the main cause of death, caused by a single-edged blade. The injury itself would require a lot of force, as well as skill and knowledge in the art of swordsmanship. This meant Andrei's killer knew sword fighting.

Alongside the body, the blade that killed him was found at Mount Khan. Some hairs were found on the handle, and they were then sent to Lars for analysis. He found that the hairs belonged to a horse, which was not surprising as horses are an integral part of Mongolian culture. This meant that Andrei's killer rode horses.

Andrei took his former colleague from COSMORUS, Yelena Tereshkova, on a tour around the hidden satellite factory where he was working. MGB agent Anya Ivanova was sent to spy on Andrei as they were suspicious of his sudden movement to Mongolia. Meanwhile, Andrei was planning to leave back for Moscow, breaking the heart of his Mongolian boyfriend, Batbayar, who thought that Andrei thought of him as a fling only. Meanwhile, horse breeder Tsetseg was giving Andrei riding lessons and entrusted him with a Mongol stallion, but told him to exercise caution. Andrei did not heed her advice, taking the horse up to Mount Khan, where he left the stallion to die.

The killer turned out to be Tsetseg.

Tsetseg initially denied killing Andrei but soon admitted to the crime. She also revealed herself as a hitwoman, and said that SOMBRA paid her to kill Andrei to "tie up loose ends". She fulfilled their orders by partially slicing Andrei with a saber. As she refused to keep talking about SOMBRA, Judge Adaku sentenced her to 30 years in jail. 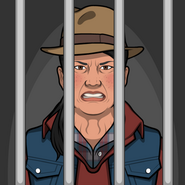 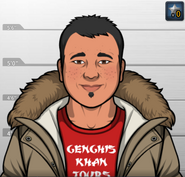 Batbayar, Andrei's boyfriend.
Add a photo to this gallery

Retrieved from "https://criminalcasegame.fandom.com/wiki/Andrei_Beloglazov?oldid=452370"
Community content is available under CC-BY-SA unless otherwise noted.