Andre Roche was the killer of escaped convict Scott Lee Allan in Of Rats and Men (Case #22 of Pacific Bay).

Andre is a 31-year-old Caucasian man with neck length messy blond hair. He has green eyes which are red around the outside and have eye bags underneath them. His right ear is pierced with a ring, and he has a soul patch and a short length beard. On his neck, he has a tattoo of five block lines with words underneath reading "CUT HERE". He dons a white t-shirt with a sleeveless jacket over it. On his left shoulder, he has five tally marks. It is known that Andre has military training, drinks whiskey, and takes sleeping pills.

Andre was the victim's cell mate. He previously served hard time for minor burglaries prior to the events of this case.

Andre was flagged as a suspect after Frank and the player found a postcard in the ruins of the team's headquarters. The player found a serial number in which Hannah managed to match Andre's penitentiary ID against the prison's database. Frank got directly to the point of Andre being Scott's cellmate, not to mention the message on the postcard about Andre's beef with Scott. Andre claimed he could not hurt Scott since the victim's strength was far greater than his. Andre then reflected his time with Scott in which the victim would take everything away from Andre before he got a chance to savor item after item. Besides that, Andre was bothered about Scott making him do all the cell chores, suggesting he suffered poor treatment from the victim.

Andre was due for a second discussion with Frank and the player after a diary entry suggested he was looking for Scott's hidden loot—the life's savings Scott stole from Veronica Blade. Andre was very upset when Frank had to bring the diary entry up since Scott kept quiet about his secrets in which he refused to out them to Andre. Andre told the team he was sent to jail for shoplifting, but the interrogation he had to put up with made him upset beyond imagination. However, Andre was caught red-handed for not just Scott's premeditated murder, but for also taking advantage of the destruction of the team's HQ by attacking Amy while wearing a mask to shake the player off his trail.

Andre learned of Scott's hidden loot in which Scott refused to out details, but also had to put up with the victim's bullying during his hard time. When Andre learned of Scott's escape from prison, he saw an opportunity to get even with his oppressive cell mate by exploiting his weakness—rats. Andre lured Scott into the abandoned theater, and then he tied the escaped convict using his military training. Andre intended to torture Scott so that he would learn the location of the hidden loot but little did he know he covered him with Rat Attract—allowing the rats to cannibalize his former cell mate. Andre attempted to release him after Scott bubbled out the hidden loot's location, but to no avail.

Judge Dante informed the court that he had his vehicle stolen by looters but also pin-pointed that Pacific Bay rats are protected species under Pacific Bay law, a move which infuriated Judge Dante for the first time in the game. For the premeditated murder of Scott Lee Allan and the alleged endangerment of the Pacific Bay rats, Andre was sentenced to 40 years in jail assigned to a cell mate who was known to snore in their sleep. Judge Dante also gave Andre a chance to come clean by asking him where Scott's loot was located at, but Andre refused to out it before Judge Dante. Therefore, the sentence stood. 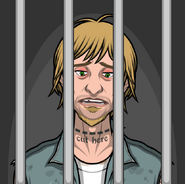 Andre, sentenced to 40 years in jail assigned to a cellmate who snores for the murder of Scott Lee Allan, the endangerment of Pacific Bay rats, and for deliberately attacking Amy Young. 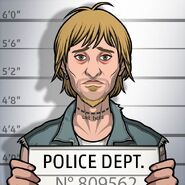 Andre featuring in a "Caption the Scene" promo.
Add a photo to this gallery

Retrieved from "https://criminalcasegame.fandom.com/wiki/Andre_Roche?oldid=468168"
Community content is available under CC-BY-SA unless otherwise noted.