Zara Tien (All Chapters)
Jack Archer & Janis Rivers (Sink or Swim 1)
Captain Shadrach (1 task in Sink or Swim 1)
Anchors Aweigh! is a case featured in Criminal Case as the twenty-first case of Travel in Time (Season 6) and the three-hundred twelfth case overall. It is the first case to take place in Age of Sail.

After the team landed in 1719 Brava Island, Cape Verde, Zara and the player investigated the port disguised as British privateers. There, they found HMS Highmore gunner Barnabas Dycker with his throat slit.

Mid-investigation, a drunken Jack told the team that he learned from a man in the tavern that the HMS Highmore crew attended a party in Governor Uriah Haddonfield's plantation. Later, the team stopped the ship from leaving port prematurely. The team later found enough evidence to arrest the ship's surgeon, Felix Humphrey, for the murder.

Felix told the team that after the party the previous night, Barnabas requested a shave from Felix. However, the boat rocked against the port, causing Felix's hand to slip and the straight razor to slit Barnabas' throat. Felix then hid the evidence of his mistake to protect his career. Captain Shadrach granted Felix clemency for the homicide; however, for his concealment of the crime, he was to be flogged and removed from the ship's roster.

Post-arrest, Uriah told Jack and the player that in order for his company, the East India Company, to prevail over the Egyptian Trading Company, they needed to secure ports and plantations at the French king's auction happening in Tortuga. The team then recovered Uriah's notice regarding the auction, where they learned that it would take place at the Severine Estate on Tortuga a month from then. Orlando then suggested the team ask Uriah if they could get on an East Indian Company trading ship. Uriah told the team that they could approach Captain Shadrach to get on the Highmore for their three-week voyage to Tortuga.

Meanwhile, Zara and the player procured a small sloop in order for Theo to give a team a crash course in sailing after they decided they could not risk using the time machine to travel around. After all the events and further sailing training, the team approached Shadrach, who told the team he could not accommodate them due to his toothache. After Janis operated on his tooth, Shadrach hired her as well as the rest of the team. The team then prepared to set sail for Tortuga.

Uriah Haddonfield
Add a photo to this gallery

Janis Rivers
Add a photo to this gallery 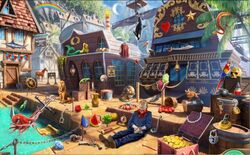 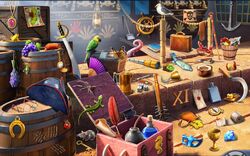 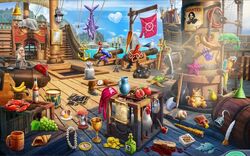 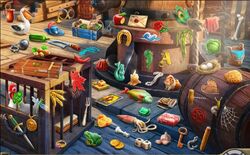 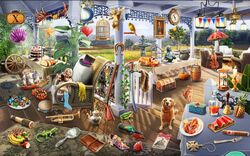 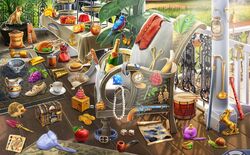 Upper Veranda
Add a photo to this gallery

Retrieved from "https://criminalcasegame.fandom.com/wiki/Anchors_Aweigh!?oldid=507761"
Community content is available under CC-BY-SA unless otherwise noted.