Anakee was a suspect in the murder investigations of social worker Sandy Grimmes in Burying the Hatchet (Case #53 of Grimsborough) and Aloki Indian Delsin Peota in There Will Be Blood (Case #56 of Grimsborough).

Anakee was a 73-year-old Aloki shaman with gray hair braided into pigtails. Her hair sported many objects including feathers and ropes. She also wore silver hoop earrings and a beaded necklace with blue and red beads and 4 horns sticking, as well as an orange tribal gown and also, a brown fur coat. Other than that, she held a shaman wand with her left hand and also sported white face paint on her face.

In her first appearance, it is known that Anakee was a smoker and was in contact with turpentine.

In her second appearance, Anakee wore a gold brooch just above her necklace.

Moments after Jones and the player pieced a broken panther amulet together, Anakee unintentionally frightened them when she suddenly approached them out of nowhere. Anakee then introduced herself to the team and told them that the amulet they found dated back to 1643 and that the team needed to go back to where the amulet came from: the Aloki village as it was in 1643 to solve the murder. She also said that with the help of a peace pipe and her shamanic ritual, their minds would be gifted with the vision of the ancient Aloki village and that if any objects from her story held their interest, she would give it to them since she had all the items in her wigwam.

Anakee was spoken to again when the team found an engraved knife in Ron Riggs's gas station shop which belonged to Solomon Grimmes, the victim Sandy Grimmes' ancestor. Anakee told the team about the story of Solomon, who was saved by the Alokis. Solomon also started dating an Aloki Indian girl named Inaya and they both engraved each other's names on a totem pole wing. The team then searched for and found the totem pole wing in the Aloki trailer park and noticed that the object also had the names of Sandy and Delsin Peota's names carved on it.

In an act of cooperation, Anakee approached the team inside the station, informing them that Sandy's unrevealed killer threatened her over the phone. She said that the killer had seen her talking to the team back at the gas station, even going far to warn Anakee that the killer would slay her if the killer continued to see Anakee support the team's murder investigation.

Anakee spoke to the team yet another time when she told them that they had unfinished business in the past according to the spirits. For this, the team travelled back to the past once again thanks to the peace pipe. After thorough investigation, the team found some torn leather. After restoring it, they saw some drawings that recounted the tragic tale of Keme Peota, Delsin's ancestor. Keme and Inaya were lovers until the day Inaya saved the life of Solomon Grimmes and she gave her heart to him. Keme was heartbroken, but had to respect Inaya's wishes, but he always wished that if a descendant of his ever met a descendant of Solomon Grimmes, they must avenge the loss of his love and that this vengeance should take the form of fatal hand removal, since in the Aloki law, anyone who steals the beloved of another must relinquish their hands and their life.

Following Shanaya's detainment and after Ron Riggs and Delsin were questioned about the Aloki Arson Incident of 10 years ago, the team opted to check up on Anakee for the last time regarding the aforementioned incident. In cooperation Anakee handed the team a bloody naphtha container scrap which she had kept with her to help the team find answers regarding about the arson. The team sent a blood sample to Grace, who found out that it was Chief King's blood. After further investigation, the team discovered that it was Chief King who was liable for the arson at the Aloki Settlement using flammable products he stole from Grim Gas, Ron Riggs' gas station (which explained King's blood on the naphtha container scrap).

Moments before Delsin Peota was scalped to death by the Crimson Order, Delsin stole Anakee's trusty peace pipe in order to seek the truth behind the reason as to why the Order was the de facto government in Grimsborough for four centuries, and to eventually solve the mystery behind Keme's solitude by Inaya's wish.

The team was fortunate enough to find Anakee's peace pipe at the crime scene (construction site at the woods) and knew they had to consult Anakee about the peace pipe. Anakee told the team that a Pilgrim-Aloki feast occurred in 1643 and Delsin wanted to go back there to see what really happened, so the team had to deploy Aloki Peace Pipes in order to continue their investigation. One of the objects that caught the team's attention Anakee was polite enough to mention: Keme went bison hunting for three months, but when he returned to Aloki bounds, the Aloki disappeared without a trace, in which the team deduced the disappearance of the Aloki of 1643 and Delsin's murder could be linked.

The team had to consult Anakee for a second time because the Feast Table of 1643 could also hold clues as to why the Aloki disappearance and Delsin's murder could be linked. Anakee was kind enough to hand over a totem head that caught the team's attention, which eventually exposed the Pilgrim-Aloki feast as the marital celebration of Solomon Grimmes and Inaya.

Anakee's help allowed the team to storm the construction site (not to mention Stuart Huckabee's "dig real deep" premise) and found a slew of skeletons, which Nathan determined (without a need for additional autopsies) were bodies of the slain Aloki—a feat in which the Crimson Order wanted the Luxury Condo project to go through in order to prevent people from catching wind of the slain Aloki from the 17th Century. Anakee would eventually be the key cooperative in the team's success in ending the Crimson Order once and for all.

The team finally ended the Order but was gravely concerned about the Aloki since they had suffered a lot for four centuries in spite of them originally residing on these lands. The team felt Anakee needed to be checked upon since she was one of the remaining key Aloki in the team's present. Anakee wanted the team to help her gain evidence that the lands were originally owned by the Aloki so the team started with the gold mines (which the Crimson Order stole from the Aloki in 1643) and found a painting, analyzed it, and verified that the painting in the gold mines were authentic Aloki works, proving that the Aloki resided in Grimsborough in the 15th Century, years before the Pilgrims set foot on this world. The team told Anakee to have all Aloki file with the Bureau of Indian Affairs to declare the Aloki lands the Crimson Order stole as Aloki Reserves (meaning no one could take the lands away from Aloki under a legal agreement in writing). Anakee felt that the gold mine (now an Aloki Reserve again) would be put to great use to help Grimsborough pay for the Order's damage, and could now become one with the fallen Aloki in the clouds. Jones did not know as to why the player had to look for the clouds, but the Aloki Spirits wanted to thank the player for finally getting the Aloki vindicated after years of Crimson Order oppression.

A new chapter of peace was about to begin in Grimsborough, with the Aloki finally getting a place in Grimsborough under written protection of the Bureau of Indian Affairs. 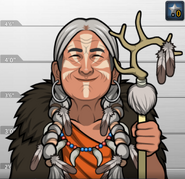 Anakee, as she appeared in Burying the Hatchet (Case #53 of Grimsborough). 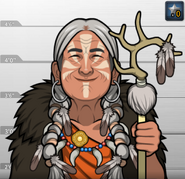 Anakee, as she appeared in There Will Be Blood (Case #56 of Grimsborough). 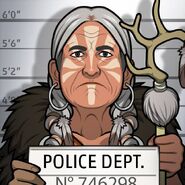 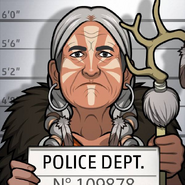 Retrieved from "https://criminalcasegame.fandom.com/wiki/Anakee?oldid=510104"
Community content is available under CC-BY-SA unless otherwise noted.