Officer Ana Herdez was a suspect in the murder investigation of teenager Cal Stark in Road to Nowhere (Case #39 of Pacific Bay).

Ana is a 40-year-old highway trooper and a native of Rhine Canyon with brown eyes and black hair. She dons a silver highway trooper star at the left side of her standard highway trooper uniform. She also wears a trooper hat and a pair of aviator sunglasses. It is known that Ana drives a pickup truck.

Ana would be flagged as a suspect after the PBPD team of Frank and the player found her mini-revolver at the Stark Farm, which was currently a crime scene in the murder investigation of Cal Stark. Hannah had to confirm Ana's ownership of the mini-revolver before Frank and the player could call her into the interrogation room. During the interrogation, Ana was surprised to see her mini-revolver, claiming that she had lost it while checking up on Cal during her trip to the Stark Farm one day—checking up on Cal every day was part of her mission to keep the peace in Rhine Canyon. Frank then regrettably had to inform the highway trooper of Cal's death.

Ana would later get into a catfight with Chief Marquez after being caught attempting to hijack Cal's murder case, believing that she had authority over Frank and the player. Ana was bold enough to inform Chief Marquez that she was not her commanding officer, but the Chief countered right away by ordering her to stand down if she did not want to lose her job. Chief Marquez then took Ana to the Pacific Bay Police Academy with her, clarifying that what allowed her to escalate to the rank of Chief of Police was that her personality differed from Ana's in every way. The Chief would also plead with Frank and the player to make a second trip to the Rhine Canyon vista and to have the player accommodate her in interrogating Ana after the vista trip.

During this interrogation afterwards, another catfight between the top police official and the highway trooper would ensue. Ana chastised Chief Marquez for allowing the killer to slip through her fingers, to which the Chief responded that the trooper had no knowledge of the murder until she became a suspect in the murder investigation. Ana then took a moment to express that she knew the troubled teen more than the Chief did, but to conclude, Chief Marquez simply advised Ana to stay put just in case she turned out to be Cal's killer.

Ana was ultimately found innocent at the climax of the case. In the hours following the case's closure, Bubba Wyatt was found guilty of dealing ecstasy. Chief Marquez thus had to do something in order to conciliate Ana, who then exposed the Chief as a Rhine Canyon native. This prompted the latter to make it clear that she would prefer to keep her private life out of public reach. 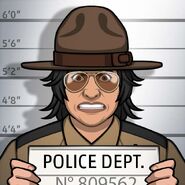 Retrieved from "https://criminalcasegame.fandom.com/wiki/Ana_Herdez?oldid=472919"
Community content is available under CC-BY-SA unless otherwise noted.