Amrita is a 23-year-old call center worker with black hair which was tied in a fishtail. She has a headpiece on her head with the microphone coming down to her chin, and she also has a silver nose ring. Amrita wore a green shirt under a brown bead necklace. It is known that Amrita is right-handed, has a criminal record and quotes Gandhi.

Amrita became a suspect after the player and Jack found her DNA which was found on the victim's keys. She was sad to hear of her brother's death, but preferred not to be consoled as she claims she can fend for herself. She and her brother grew up among the streets going through hardship after hardship, but have since then been able to live normal lives. When asked if anyone would have wanted to hurt Deepak, she said apart from his police work her brother led a quiet life.

Amrita was interrogated again regarding a gun-cleaning brush found in her backpack. She was infuriated at Jack and the player for berating her for not telling them she owned a gun, saying again she can't protect herself. Jack pointed out that since her brother was a policeman he would not have been pleased, but Amrita said he purchased that gun for her. The victim felt as a cop, it was his duty to teach his sister how to protect herself, though she lost the gun when the tsunami hit Mumbai.

Despite what she said, it was revealed that Amrita was the person responsible for Deepak's murder. Amrita initially denied killing her brother, whom she loved, but admitted the crime soon after. Amrita was alone in the museum and felt someone approaching her from behind. Thinking the person was a raider, she turned around and fired her gun without identifying the person (per her brother's advice on self-defense). She discovered too late that she had taken Deepak's life.

At the trial, Judge Adaku understood that the murder was an accident, but also stated Amrita tried to divert police attention. The judge issued a 7-year jail sentence for Amrita. 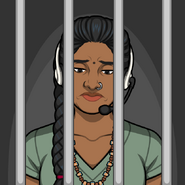 Amrita, sentenced to 7 years in jail for the accidental murder of her brother, Deepak Kumar. 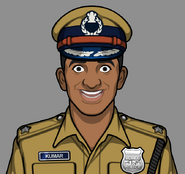 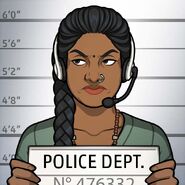