Ammon Bast (also known as The Saboteur; 2003–2029[c]) is a recurring character in Season 6 of Criminal Case, acting as the season's primary antagonist. He was a suspect in the murder investigation of CEO Gérard Arnault in Bash of the Year (Case #18 of Travel in Time). He also made two minor appearances and a video appearance throughout the season before killing explorer Santiago Sanchez in The Wrath of Khan (Case #30 of Travel in Time) and receiving the death sentence as a result. A past version of Ammon was then flagged as a suspect in the murder investigation of rogue time traveler Nebet in Time's Up (Case #31 of Travel in Time), where he was murdered during the investigation.

Ammon was the 26-year-old head of intelligence for the Ptolemy Dynasty in the altered timeline of 2029 and the person responsible for sabotaging the team's time machine to strand them in the 1960s. He had short black hair that was tousled upward, shaved sides, blue eyes, and a chiseled face. He was seen wearing a gray collared jacket with black buttons. The right side of his jacket was accented with a light gray pattern and turquoise lining.

In his video appearance, he was seen wearing a hooded cloak with shoulder pads, a bandana around his mouth and a headset microphone across his right cheek.

In his first suspect appearance, it is known that Ammon ate ta'meya, knew the constitution and smoked a hookah pipe.

In his appearances in Age of Sail, he wore a blue collared jacket with yellow epaulettes, gold buttons and beige straps. He also sported a turquoise scarab brooch with gold wings.

In his second suspect appearance, he wore a green jacket with a gold collar under a gray patterned shawl pinned at the front with a gold clasp. Additionally, he sported a green hat lined with white sheep's fur and a scar across his right eye. It is discovered that he was fit, drank rice wine and bit his nails.

After arresting Noah Lowe's killer, Nebet alerted Zara and the player that she had seen someone examining the time machine. She claimed that she had tried to follow the man, but lost him in the crowd of the festival. She then suggested that they searched for a camera that the man had passed by. After finding the camera, Zara and the player learned (per Kai) that the man had purposefully sabotaged the time machine in order to strand them in the 1960s.

After arresting Storm Huxley's killer, Jack, Zara and the player attended the 5th of July ceremony, where the return of Princess Nefertiti was announced. The team initially suspected Nefertiti to be Nebet, but after Jack and the player found a phone that resistance spy Ravi Jabari had left in the black market, the team discovered (per Kai) that Nebet's real identity was Princess Nefertiti and that she had conspired with the saboteur (who was eventually confirmed to be Ammon) in sabotaging the team's time machine. The team then questioned Ravi, who said that Ammon was hosting a party at his place the following day.

Ammon became a suspect after Jack and the player were alerted to the murder at Ammon's party. Ammon identified the victim as Gérard Arnault. He offered his condolences to the team regarding the murder (the team had assumed the guise of French ambassadors) and revealed that he had congratulated the victim on the launch of his new GyptChip. He then told the team that Gérard had headed to the kitchen, prompting the team to investigate there.

Mid-investigation, Ammon demanded an update on the team's progress. He then warned the team that if they did not arrest someone soon, he would take over the investigation.

Ammon was spoken to again about his argument with the victim. He informed the team that he had worked with the victim on the latest GyptChip to ensure that it met the government's needs. However, the victim undermined his authority at every turn, even suggesting that Ammon did not deserve his role as head of intelligence. Instead of punishing Gérard for his impudence, he reminded him that insulting a government official went against the constitution.

Ammon was found to be innocent after the team incarcerated Eugene Donkin for Gérard's murder. Jack and the player turned Eugene over to Ammon for sentencing. Ammon rebuked Eugene for his actions considering that he was the face of the Ptolemy Dynasty and told him that the Pharaoh would have his head. Jack then requested that Eugene was incarcerated for his actions as France disapproved of capital punishment. In order to cement New Cairo's relationship with France, Ammon agreed to spare Eugene from capital punishment and incarcerate him instead.

Post-trial, the team learned more about how Ammon and Nefertiti colluded to rewrite history. Per Orlando's analysis of Ammon's diary, Zara and the player learned that Ammon had interfered with history at various key junctures in time to keep the descendants of the Ptolemy lineage on the throne and cement ties with other monarchies by marrying said descendants to kings and queens around the world. Ammon had also managed to take over the trade routes in the early 1700s.

After arresting Evangeline Rousseau's killer, the team hailed a ship using Kai's makeshift flare gun. To their dismay, the captain of the ship turned out to be Ammon. Ammon revealed that he had figured out that the team had gone to the Age of Sail in order to mess with his plans. He then relished in the fact that the team was now stranded at his mercy, but before Ammon could do anything, Captain Mary Read and the crew of the Black Sparrow arrived to defend the team. Ammon's henchmen then appeared and outnumbered the crew, prompting Mary to order the team to retreat to her ship.

After arresting Henri Pelletier's killer, Governor Uriah Haddonfield informed Jack and the player of an Egyptian mucking with the auction candle, explaining that the candle snuffing out would mark the auction over. The team found the candle, which (per Kai) originated from the future and could be turned off by remote control, proving Ammon's presence in the auction room. The team then switched the real candle back, thus Ammon would have no control of the candle.

After the team persuaded Lord Quentin Montague to fill the role of auctioneer, Uriah, the East India Company envoy, and Captain Shafra and Ammon (disguised as Shafra's assistant), the Egyptian Trading Company envoy, met in the auction room. After exchanging words, Quentin started the bidding and eventually, the East India Company won the auction. After losing the auction, Ammon shot Orlando in the heart and then jumped off the veranda. On the veranda, the team found out that Ammon had loaded the 18th-century weapons into his time machine. Thanks to Kai's slipping his tracker onto Ammon, Kai would later figure out that Ammon was in the Mongolian Empire, 1235, prompting the team to go there.

After arresting Argat Noyan's killer, Erhi confirmed that Ammon was the foreigner who told her to kill the victim. At their yurt village, the team found a mobile phone, which (per Kai) verified that Ammon was resorting to his backup plan, involving meeting with Mongol ruler Ogedei Khan to provide him the aforementioned weapons.

After arresting Tangzi Khatun's killer, Jack and the player asked the Great Khan about Ammon, who was a great friend of his. He informed the team that Ammon gave advice and mighty weapons to him in order to prematurely eliminate the Song Dynasty. Shortly after, General Subutai informed them that the Khan's daughter, Princess Torgoljin, was kidnapped. After learning that the Chinese were responsible for the kidnapping, they reported to the Khan, who trusted the team to get his daughter back since Ammon was preparing for the army at the Great Wall.

After arresting Jin Bingxu's killer, Zara and the player found out that Ammon manipulated Song first minister Shi Miyuan into kidnapping Torgoljin. The team them informed Song Emperor Lizong that Ammon intended to trigger the Mongol-Chinese war by manipulating both sides.

Inside the Mongolian camp, Jack and the player ran into Ammon with the Khan whilst they were looking for Kai and Penelope. There, the Khan alerted the team to the murder of explorer Santiago Sanchez. Jack told the Khan that they would find the killer, but when they tried to talk about Ammon, the Khan told them that he would not allow Ammon's reputation to be called into question without proof.

Ammon became a suspect for the second time after Jack and the player learned that he had eaten with Santiago before the murder. He admitted to orchestrating the kidnapping of Princess Torgoljin in order to convince the Khan to destroy the Chinese. When Jack asked him about his meeting with Santiago, Ammon claimed that their meeting did not matter and taunted the player about the upcoming war.

Ammon was spoken to again about his attempt to encourage Song Emperor Lizong to kill Santiago. He admitted to writing the letter, but told the team that he would tell the Khan that it was a forgery if they tried to show it to him. He then claimed to be untouchable as he had irreversibly twisted the Khan's mind.

In the end, it was proven that Ammon was Santiago's killer. Ammon confessed to beating Santiago to death with a meteor hammer to provoke the Khan into waging all-out war against the Chinese. Telling the team that the damage he had dealt to the timeline was irreversible, the team handed him to the Khan, who proceeded to slash Ammon's throat with a sword as punishment. The Khan refused to back down from the war, however.

Later, after realizing that the damage to the timeline was irreversible, Orlando suggested that the team returned to the time of Julius Caesar's murder in Ancient Egypt, 47 BCE in order to arrest Ammon and Nebet before they could alter the timeline.

Back in 47 BCE, during Caesar's murder investigation, Ammon became a suspect once again after Zara and the player found his phone in the slave quarters. Ammon initially played dumb, but when Zara told him that they knew about his plan to sabotage the time machine, he wondered how the team knew about their plan. Zara and the player then arrested Ammon and told him that Nebet had been murdered.

Later, Kai told the team that Ammon had escaped from his cell. Zara and the player reinvestigated Queen Cleopatra's garden, where they found Ammon's body with his heart removed from his chest. Janis revealed that the murder was identical to Nebet's. She then revealed that there was no evidence on the body, but suggested that they checked the security footage for Ammon's cell. The footage showed that Ammon knew his killer. He assumed that they were going to save him, but when the killer presented a dagger, the camera malfunctioned. This prompted Zara and the player to interrogate Amy as she was the only suspect with access to the cell.

Ammon and Nebet's killer was proven to be Priestess of Ra Takhat Wabet, who was actually Nebet's future self. She had killed Ammon and her past selves in order to prevent them from altering the timeline. 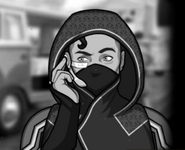 Ammon, as he appeared in Summer of Death (Case #6 of Travel in Time). 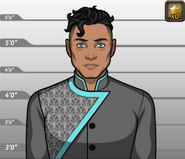 Ammon, as he appeared in Bash of the Year (Case #18 of Travel in Time). 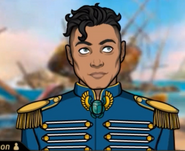 Ammon, as he appeared in Shipwrecked! (Case #23 of Travel in Time). 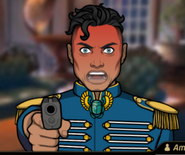 Ammon, as he appeared in Going Once, Going Twice, Dead! (Case #25 of Travel in Time). 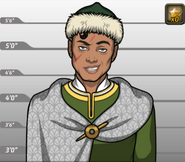 Ammon, as he appeared in The Wrath of Khan (Case #30 of Travel in Time). 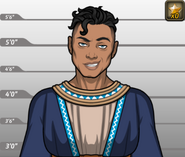 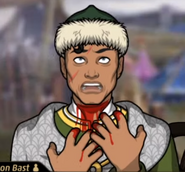 Ammon, killed by Ogedei Khan as punishment for the murder of Santiago Sanchez in 1235. 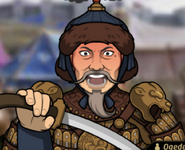 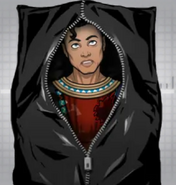 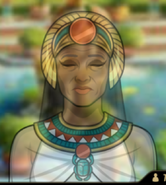 Retrieved from "https://criminalcasegame.fandom.com/wiki/Ammon_Bast?oldid=541038"
Community content is available under CC-BY-SA unless otherwise noted.