Amity Malone was a suspect in the murder investigation of flight attendant Dolores Zamora in Dearly Departured (Case #49 of The Conspiracy).

Amity is a 47-year-old flight passenger with blue eyes, short blonde hair and wrinkles on her face. She is seen wearing a pink blouse underneath a purple plait jacket. Additionally, she sports pink pearl earrings and has eyebags. Furthermore, she is seen holding a pet container for her pet axolotl, Fred. It is known that Amity reads Cloud Mall, speaks Spanish and uses Saved by Flowers.

Amity became a suspect after Jones and the player learned that she had been assigned to assist her on the flight. After being told that there was a murder, she began to panic and explained that she was terrified of flying. Amity was then told that the victim was the attendant who had been tasked with providing her assistance on the plane, which provoked her further. Jones and the player then left her to calm down.

Amity was spoken to again about her ripping the victim's vest. She explained that the victim had forcibly removed her from a flight after she was told that Fred, her therapy axolotl, did not qualify as a therapy animal and was not allowed on board. When she bumped into Amity the next morning, she tore her vest in a fit of rage.

Amity was found to be innocent after the team incarcerated Shane Redfern for Dolores's murder. But she later caused trouble when she stole Sofia Quadrelli's suitcase. When confronted, she revealed that she took things when she was super stressed. She apologized for taking the suitcase and was fined for petty theft. 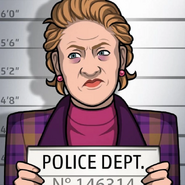 Retrieved from "https://criminalcasegame.fandom.com/wiki/Amity_Malone?oldid=461962"
Community content is available under CC-BY-SA unless otherwise noted.