Amelia Bats was a suspect in the murder investigation of poet Edgar Woe in poet Graveyard Shift (Case #44 of Mysteries of the Past).

Amelia is a 63-year-old housekeeper. She has long black hair tied back in a bun and brown eyes. She wears a black maid's outfit with white collars and a white lace shawl. She also sports red lipstick, silver earrings and holds a brown feather duster in her right hand. It is known that Amelia has a cat.

Amelia became a suspect after Viola Pemberton found her fingerprints on a dish stained with the victim's blood. She explained that she was Count Blutsauger's housekeeper, and that many young layabouts kept breaking into the castle, explaining how Edgar's blood ended up on the dish. When told about his murder, she said it served him right for getting drunk and trespassing in the castle.

Amelia was spoken to again about a book that spoke of bathing in the blood of virgins. After Isaac accused her of being a believer in witchcraft, she assured them that it was only light reading. When asked if she did not believe that bathing in Edgar's blood would restore her youth, she snapped at Isaac for insinuating that he did not think she was already youthful, and told them that Edgar was not a virgin, so bathing in his blood wouldn't work.

Amelia was found to be innocent after the team incarcerated Annabel Leigh for Edgar's murder. 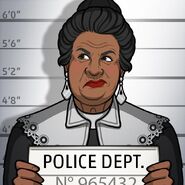 Retrieved from "https://criminalcasegame.fandom.com/wiki/Amelia_Bats?oldid=415423"
Community content is available under CC-BY-SA unless otherwise noted.