Ambassador Lee was a suspect in the murder investigations of scientist Ruth Campbell in Blood in the Blender (Case #48 of Pacific Bay) and programmer Bob Levene in Programmed to Kill (Case #50 of Pacific Bay).

Lee is a 50-year-old ambassador for the People's Republic of North Freonia. He wears an army uniform which is decorated with several medals. His badge sash also sports the Communist hammer and sickle symbol.

In his first appearance, it is known that Lee makes smoothies and takes hormones.

In his second appearance, he has an oil stain on his uniform and it is discovered that he plays chess.

Blood in the Blender

Lee was first interrogated by the player and Amy after finding a medal belonging to him in the victim's lab. He said that the People's Republic supports her research and had been sponsoring her. Amy asked about what she was working on, but Lee informed her that it was classified. After being told of Ruth's death, he panicked saying he needed to find another scientist or his leader would have him killed.

After investigating the victim's house and analyzing a newspaper article thanks to some help from Russell, they managed to decode a message to the victim. Russell managed to decode the message as, "This is your last chance, Doctor. Give the Republic your secrets, or die!". The team deduced that Lee sent it, so they left to interrogate the ambassador once again. He was angry that Ruth was not working fast enough, and his leader started to become angry with him. Lee then revealed that the victim was working on creating a clone army for the Republic. His leader said that a clone army would be better since they would be invincible and renewable.

Ambassador Lee was then cleared of all suspicion after Nigel Campbell was indicted for Ruth's murder.

Amy and the player interrogated the ambassador once more after his fingerprint was identified on a letter sent to the Levene. He said that he never wrote a letter to him, but after being presented with evidence he revealed that the two of them were in contact in order to benefit the People's Republic. It did not end up working as the victim ended up having a change of heart. When informed of his murder, the ambassador said he was sorry to hear that as the People's Republic respects geniuses.

Lee was spoken to again after finding a telegram he sent to the People's Republic saying that some technology was almost theirs. He said he was under no obligation to reveal what technology the Republic was after. But after being reminded he was involved in a murder investigation, he said the telegram was to inform his superior that the scientists working on the nanobots were almost finished. However, the victim kept getting in the way as Bob believed was the nanobots were too much of a threat to the world. Once being told that nanobots were the tool responsible for Bob's murder, he ecstatic to hear that they could do that, as they were now even heavier in value to the People's Republic.

Lee was found innocent of murder a second time after the team arrested a robot going by the name of Aphro-Dyte for Bob Levene's murder. 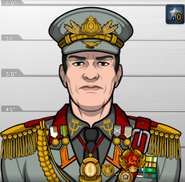 Lee, as he appeared in Blood in the Blender (Case #48 of Pacific Bay). 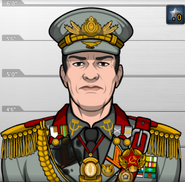 Lee, as he appeared in Programmed to Kill (Case #50 of Pacific Bay). 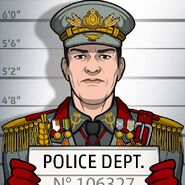 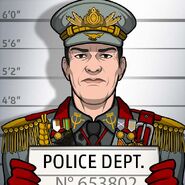 Retrieved from "https://criminalcasegame.fandom.com/wiki/Ambassador_Lee?oldid=533121"
Community content is available under CC-BY-SA unless otherwise noted.