Amaru Condor was a suspect in the murder investigation of SOMBRA agent Zoila Huanca in Total Eclipse of the Heart (Case #46 of World Edition).

Amaru is a 37-year-old tradesman. He dons a red, blue, orange, and brown hat and poncho, and a black and red robe wrapped around him with a cochineal stain. It is known that Amaru speaks Quechua.

Amaru became a suspect after the player and Jack found the victim's hair in one of the hats he had sold. He said she bought the hat with the intention of giving it as a gift to someone, but she put in on herself. He said she was a regular to the site, but he knew she was not from around the area; many people knew her by sight, but she never spoke much to anyone. When informed that the murder was no accident, he said he had no involvement with it, he just sold her a hat.

Amaru was interrogated again regarding a doll he was selling that looked similar to the victim. He just said that was for selling to tourists, since some people want burial dolls. Jack pointed out it was pretty weird that he made a burial doll that looked similar to the victim, but Amaru said it was just inspiration and that he was not planning on putting her in a tomb with it. He went on to say he was not happy with the murder, since it has scared the tourists away from the sites, and that he would do nothing to ruin his livelihood.

Amaru was found to be innocent after the team incarcerated Claudio Aguirre for Zoila's murder. But he was spoken to again by the player and Michelle about t-shirts which he was selling that supported team Luzaguay in the Olympics taking place in Brazil. He believed they were going to win every medal, since they came out of nowhere but were like athletic machines. He was planning to get distribution in Brazil to sell the shirts wherever he can, hoping to make a large profit. 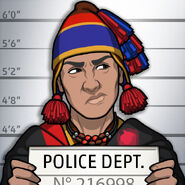 Retrieved from "https://criminalcasegame.fandom.com/wiki/Amaru_Condor?oldid=415702"
Community content is available under CC-BY-SA unless otherwise noted.