Alonzo Conte (real name Gianni Bonfiglio) was a suspect in the murder investigation of Italian priest Pietro Agnelli in When Shadows Fall (Case #5 of World Edition).

Alonzo is a 28-year-old gondolier who used to be a mobster. He wears a red and white striped shirt with a red neckerchief around his neck and gold leaf on his shirt's left side. It is known that Alonzo drinks cappuccino and knows Dante's Inferno.

Alonzo became a suspect after the player and Carmen found a medallion of the victim in his belongings. Like the other suspects, he praised the victim, calling him a saint. He went on to say that the victim never judged anybody, and that he was even too good to be the pope. When Carmen asked him if he had any reason to fear the victim's judgment, he said everyone had reasons to fear judgment, but he himself was never judged by the victim.

Alonzo was spoken to again regarding a sash with a message that was sent to the victim. Analysis from Lars revealed it was dandruff belonging to Gianni Bonfiglio, a member of the mob who disappeared last year. Carmen pointed out there was not a member of the mob in the list of suspects, but Lars pointed out that Gianni was actually Alonzo. Dupont also pointed out the message sent meant "Not all truths should be told". Alonzo was not willing to reveal his identity, but when told of the DNA match he pointed out that the victim was the only one to know of his identity. He tried to hide from the mob as a gondolier, but the victim requested Alonzo to turn himself in. He sent the message to the victim in hopes he may not tell anyone of his identity.

Alonzo was found to be innocent after the team incarcerated Brother Klaus for Pietro's murder. Carmen and the player had to speak with him regarding a buoy filled with TNT found on the canals. Alonzo assumed the bomb was meant for him, believing the mafia managed to find him. Carmen told him to settle down as she believed it was not meant for him, and asked him if any special event was planned in Venice soon. Alonzo said that a section of the canals was to be used as a rally event for the European Referendum. The player and Carmen believed the bomb was the Promethians' doing, much to Alonzo's relief. 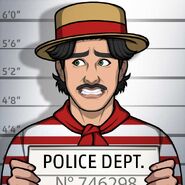 Retrieved from "https://criminalcasegame.fandom.com/wiki/Alonzo_Conte?oldid=479413"
Community content is available under CC-BY-SA unless otherwise noted.