Ally Salinger was a suspect in the murder investigation of historian Reggie Liotta in Writer's Blocked (Case #21 of The Conspiracy).

Ally is a 28-year-old tour guide of the Grimsborough Museum. She has bobbed brown hair and green eyes concealed behind a pair of black glasses. She wears a short sleeved white shirt with grey stripes and a black tie under a yellow low cut shirt. She also wears pearl earrings and sports dark red nail polish. It is known that Ally chews gum and uses hand sanitizer.

Ally became a suspect after Jones and the player learned that she was one of the last people to see the victim alive. After being informed of the murder, she recalled seeing the victim go back into the museum after his meet and greet. She then said that she had always been Reggie's biggest supporter. Her interview prompted Gloria and the player to reinvestigate the museum.

Ally was spoken to again about her anger with the victim. She said that the victim's fame was going to his head, and that she had been left out of his dedications, despite being a constant rock for him.

Ally was found to be innocent after the team incarcerated Jebediah Cobb for Reggie's murder. 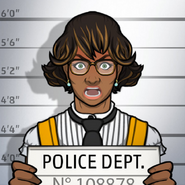 Retrieved from "https://criminalcasegame.fandom.com/wiki/Ally_Salinger?oldid=518655"
Community content is available under CC-BY-SA unless otherwise noted.