Allen is a 60-year-old hermit who has green eyes, long untidy gray hair, and a very long beard and mustache. There are also hints of unknown marks on his forehead.

In his first case appearance, Allen dons a stained red shirt underneath a tattered green plaid jacket. Also, his untidy hair consists of a shoot, a mushroom, and a leaf sticking out. It is known that he knows knot making, has contact with wood mushrooms and wears hiking boots.

In his second case appearance, Allen appears slightly different: he gets rid of the mushroom sticking out of his hair, and adds a pom-pom as well as a pink teddy-patterned scarf to his attire. Furthermore, it is discovered that he eats pumpkin soup.

In his third case appearance, Allen appears exactly like he did in his first case appearance, although the mushroom sticking out of his hair is still missing. In addition, it is revealed that he likes riddles and smells of blackberries.

In his fourth case appearance, it is noted that Allen has radiation sickness and has a generator.

After Ruthie Samson informed the team of Frank and the player to investigate the Stone Circle for clues regarding White Peaks' infamous Night Walker—a boogeyman who supposedly comes out of the forest to snatch people away—the player took a look around Stone Circle for clues but at the expense of Allen scaring the authorities. This made Frank flag Allen as a suspect, after which the player required Allen to stay put.

Allen wanted to scare Frank and the player away but Frank took that as a sign the hermit was thought to be the Night Walker, although all Allen wants to do is to scare people out of the Night Walker's reach for safety's sake like he always does. Allen claimed that he did not know anyone (not to mention Paula) since he was always hiding out of tourists' eyes, but assured to the team he was against homicide.

Allen was due for a second conversation after Frank and the player found Paula's camera (pieced back together by the player) containing a picture of Allen scaring Paula away. Allen shunned light flashes which made him a liar but assured Frank and the player again that he did not kill anyone not to mention he disliked people taking pictures of him, which explained why he destroyed the camera. Allen's second conversation suggested that he was fiercely protective of the woods, which he considers his home.

Allen was found innocent after Ruthie was found guilty of grand homicide, but he had to cooperate with Duncan Young's inquiries about the Night Walker, in which he suggested the player and Duncan to take a look at the Stone Circle for one final time to further Duncan's hunt for the Night Walker.

Allen found himself in trouble for a second time after the player found murdered filmmaker Virginia Watchbird's VHS tape in the Night Walker's cabin analyzed by Hannah to be a footage of him and Virginia arguing aloft.

Allen did not like visitors in his sight, but Frank told the hermit about the VHS tape that held an argument between him and Virginia. Allen did not like Virginia being on top of him for up-to-date information about the Night Walker, but assured Frank and the player he had no intention of bloodshed under any circumstances. Since Allen lived in the woods where the Night Walker was rampant, Virginia harassed Allen of sorts although he would not allow people to produce a documentary about the Night Walker. Since filming often made other people angry (much to Virginia's ignorance), Frank and the player made a return stop at Charlie Watchbird's distillery.

Allen would be approached by Frank and the player after a plush doll simulating Virginia's appearance was found at the derelict cabin. Allen told the team he made the doll but was angry that Frank and the player touched it and wanted it back without duress. Frank did not understand as to why Allen hated Virginia and wanted to make a simulated doll of the victim, to which the hermit replied that it was some sort of a love-hate relationship in which if Allen was not angry, he would be willing to talk to her. Allen was willing to give out information about the Night Walker to Virginia, and because of his actions of anger, he felt sad about the filmmaker's death, so the player gave the doll back to the hermit.

Allen was found innocent when Lola Dickinson was found guilty of grand homicide, but was indirectly involved with the nasty verbal argument between Amy and her mother, Miriam. Frank and the player trailed Amy correctly, seeing that Allen cheered up the junior cop in lieu of getting away from what she experienced during her childhood friend Virginia's murder investigation. No harm was done to Amy as all Allen did was nourish her in peaceful terms.

Allen found himself in trouble yet again following the murder of urban legend hunter Roberto Vasquez, who was supposedly murdered by a returning Night Walker. After Amy and the player found a scarecrow in the mountain top of White Peaks, the player did not hesitate to have Yann analyze the plaid fabric on the scarecrow which he then confirmed to belong to Allen. Yann's finding were grounds for Amy and the player to interrogate the old hermit.

Allen admitted he made the scarecrow to scare the humans, but Amy wanted to know if he made the paper boat with the creepy message not to mention her suspicions of creating scarecrows and threats to off Roberto. Allen responded that he made no threats and shed no blood, thus concluding that he used scary marionettes to fend for himself. He also suggested the player to remain home and to lock all doors since the Night Walker was said to be everywhere.

Allen would be questioned by Amy and the player once again after the player found a "hate tablet" pieced back together which had Allen shouting "I hate you!" to Roberto. Amy grilled Allen with both of her feet on the ground, prompting the hermit to question the team if they remembered about Virginia's murder. Amy admitted to Allen she was still affected by Virginia's passing, which prompted Allen to admit that even with some arguments here and there (not to mention they initially did not look at each other eye-to-eye) Virginia was considered by Allen as his friend, and bubbled out the reason as to why he drew the hate tablet: Roberto should have protected Virginia from harm which he failed to do so, meaning the message on the hand-drawn hate tablet was plausible.

Allen was found to be innocent for a third time after Amy was forced to put the law over family as the face behind the Night Walker's guise was finally unearthed, but Frank had to check the forest bridge to ensure that there were no more Night Walker sightings aloft. Frank found a rock with a strange symbol and since he did not know what it was, the player shipped the strange symbol to Hannah for analysis. Hannah deduced that the strange symbol was a part of the hobo alphabet, a language used by the homeless, i.e. drifters. In simplicity, the strange symbol suggested that the town was hostile and was not safe to be in those premises. Frank knew that Allen was the one who drew the strange symbol, so he and the player had to talk to the old hermit as to why he had to write that symbol on the rock.

Allen claimed that he had too much trouble throughout White Peaks and felt its environment was hostile since its towns were not pleasant. Because the towns were hostile, Allen left something in the mountain top a long time ago and pleaded with Frank and the player to find the object for him.

Frank and the player found a picture of Allen when he used to serve the United States Marine Corps, so the player did not hesitate to give the picture back to him. Allen was proud to be a marine, but since he sustained a money-draining wound in the line of duty, he was forced to live his life as a drifter since the veteran pay did not cover his bills. He felt a lot of people thought of him as a monster, which angered him but felt that the player changed his life forever.

Allen appeared a suspect again after finding him at an abandoned laboratory. He explains that he is at The Wastes in order to meet David Rosenberg, who happened to be the victim. Amy wondered how the two met, but Allen said that David sent him a letter saying he has something important to tell him. He was shocked to hear of David's murder, and questioned why he had to come to The Wastes after all that.

Allen was interrogated again after they found a letter to the victim saying to stop his experiments. The letter was sent by the son of Albert Tesla, and was sent from White Peaks, so they assumed it was from Allen. He confirmed that he was Tesla's son, and he came to The Wastes to speak with David. Allen went on to say that everyone believed Tesla was a brilliant scientist, but in all actuality he was crazy and dangerous. His experiments ended up driving his mother insane, and she died in an asylum. So he changed his name, joined the army, became a hermit and never thought of his father again. When he heard that a team of scientists were trying to complete his father's work, he tried to convince them to stop. When Amy thought he killed David to stop Tesla's experiments, he replied saying he did not but that The Wastes would kill them all anyway.

Allen was found to be innocent for a fourth time after the team incarcerated Jess Prakti for David's murder. He was later spoken to again in hopes of finding out what Meteor Systems is up to. Unfortunately, his father kept all of his experiments a secret. He begged the player to figure out what happened, because he believed his father's disappearance is responsible for the crimes that have occurred ever since 1961. Amy doubted what he said, but Allen insisted they search his father's lab for evidence. They eventually found a film reel about Tesla's experiments in 1961, and sent it off to Hannah for analysis. On it, they found that Tesla wanted to upload his brain into a computer. When they spoke to Allen again on the matter, he said he did not want to talk his father's experiments any more as they broke his family apart, and could possibly ruin the world. 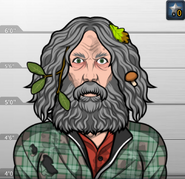 Allen, as he appeared in Into the Woods (Case #27 in Pacific Bay). 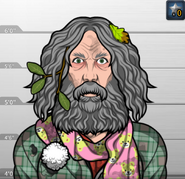 Allen, as he appeared in The White Peaks Project (Case #29 of Pacific Bay). 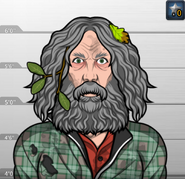 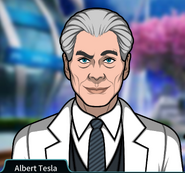 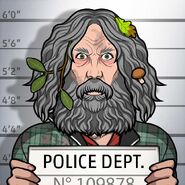 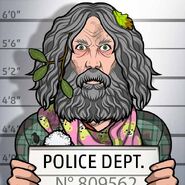 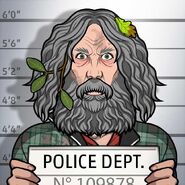 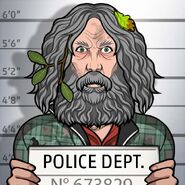 Retrieved from "https://criminalcasegame.fandom.com/wiki/Allen_Muir?oldid=413831"
Community content is available under CC-BY-SA unless otherwise noted.