Alice Riddel was a suspect in the murder investigation of Dr Irving Blackmoor in Doctor, Interrupted (Case #45 of Mysteries of the Past).

Alice is a 12-year-old patient at Gryphon Sanctuary. She has long blonde hair with a large blue bow and blue eyes. She dons a white collared blue dress and is seen carrying a stuffed white rabbit. It is known that Alice eats mushrooms.

Alice became a suspect after Maddie and the player found her medicine in the victim's bag. She told them that her parents went to heaven a year ago, but her animal friends kept her company, which was when the doctors brought her to Gryphon Sanctuary. After Maddie told her that the victim had been "hurt", she suggested that the giant caterpillar had chewed him up, saying she had warned him about it. She then informed them that the victim took her out to the garden every day, prompting Maddie and the player to investigate it.

Alice was spoken to again about a disturbing clay sculpture she made of the victim. She said she made it after the victim told her that her animal friends didn't exist, causing her to get mad. She then wondered if the victim was the one that wasn't real, saying his death served him right.

Alice was found to be innocent after the team incarcerated Dwayne Reed for Dr Blackmoor's murder, but on Dwayne's confession, he learned that Alice was on the verge of facing imminent lobotomy. One day, when Dr. Blackmoor summoned Dwayne to his office for an electroshock session, he lunged at Blackmoor with extreme force, strapped him to the electroshock machine, then set the voltage on high, electrocuting him to death in order to protect Alice. After the trial, Judge Lawson and the player then helped to reunite her with her grandmother, Lorina Riddel, who took her out of the asylum. She then thanked the player for everything that they had done for her. 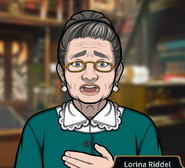 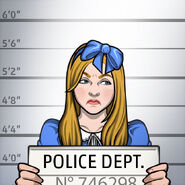 Retrieved from "https://criminalcasegame.fandom.com/wiki/Alice_Riddel?oldid=415427"
Community content is available under CC-BY-SA unless otherwise noted.