For the golem of herself, see "Alice Kelly".

Alice Kelly, appearing as a minor character in Criminal Case, was mentioned during the events of This American Death (Case #16 of Supernatural Investigations), where she was killed by her husband, insurance claims adjuster Dan Kelly, and was replaced with a golem to hide the truth behind her death.

Alice was the wife of Dan Kelly. She had blue eyes and long ginger hair. She wore a turquoise dress under a white apron and sported magenta nail polish and a pearl necklace. She was also seen holding a plate of chocolate chip cookies.

During "Alice"'s arrest, "Alice" revealed herself to be a golem of Dan's creation. Wanting a perfectly obedient wife, Dan killed the real Alice and built "Alice" with the help of a witch. Dan then had Alice cremated and hid her ashes in a brick on the property. 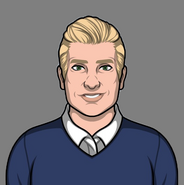 Dan Kelly, Alice's late husband and killer.
Add a photo to this gallery

Retrieved from "https://criminalcasegame.fandom.com/wiki/Alice_Kelly_(human)?oldid=526890"
Community content is available under CC-BY-SA unless otherwise noted.