Alice Blick was a suspect in the murder investigation of Captain Harry Hugo in The Hunger Planes (Case #28 of Pacific Bay).

Alice is a 25-year-old survivor of a doomed Osprey Airlines flight reported missing two weeks prior to the events of the case. She has long brunette hair (with a few grass stains and a leaf sticking out) and green eyes concealed underneath a pair of slightly cracked black glasses. She dons a torn black coat over a white shirt, and wears a gray fox around her neck. Furthermore, she sports several blood stains throughout her body and face, as well as frostbite. It is known that Alice uses herbal toothpaste and can sew.

Alice was labeled as a suspect in a murder case after the team of Amy and the player found an Osprey Airlines passenger manifest which contained her name on it. According to Russell, Alice is a loner, but moreso, Russell suggested Amy and the player to look for her in the military observatory, in which they succeeded in doing so. The player's action in the observatory angered Alice as she wanted to be alone, but Amy had to extract Alice into the interrogation room for questioning.

Alice demonstrated that she did not like to be indoors but Amy had to inquire about Captain Hugo, the deceased pilot of the plane. Alice suggested that Captain Hugo was an adulterer given that she had to share survival items with him, which made her uncomfortable. To shake Captain Hugo off, Alice took refuge in the mountains, and pleaded with the team to leave her in the cold.

Amy and the player found Alice a second time somewhere throughout the debris of the plane crash, which made her hate the idea of being followed by the police, suggesting that she did not like coincidences at all. Amy made it clear that Alice would remain in the police station until her innocence was proven.

Alice would be questioned after Yann found out the blood on the snowman belonged to a dead fox, which Amy could not help but notice. During her second conversation, Alice mentioned about the Night Walker—a "masked creature" that supposedly kidnaps people in the forest and kills them—who taught her how to kill for food but in addition gave her permission to kill Captain Hugo for food as well, since she suspected him of sexual harassment following the plane crash. Alice thus wrote the threat on the snowman to fend for herself and to scare Captain Hugo off.

Although Alice was ultimately found innocent at the climax of the case, she had to cooperate during Duncan Young's Night Walker inquiries thanks to a journal the player found through the debris of the plane crash confirmed by Russell to be Alice's notes on the Night Walker. 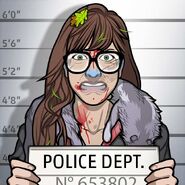 Retrieved from "https://criminalcasegame.fandom.com/wiki/Alice_Blick?oldid=457775"
Community content is available under CC-BY-SA unless otherwise noted.