Alice August was the killer of stripper Trixie Velvet in Beautiful No More (Case #8 of Grimsborough).

Alice is a 25-year-old barmaid at the Blue Flamingo nightclub. She has short platinum blonde hair and blue eyes. She dons a white off-shoulder dress and a necklace. It is known that Alice is in contact with cats and wears Eau d'Homme.

Alice soon became a suspect in the murder investigation seeing as she worked at the same nightclub as the victim.

Throughout the investigation, Jones would speak to Alice affectionately and it seemed as if he was slowly falling in love with her. However, he was shocked when Alice was ultimately found guilty of the murder.

Alice was in love with Trixie and wrote a anonymous love letter to meet her in the alley of Joe’s Diner. However, when they met each other, Trixie laughed at Alice because she thought that she was a man who wrote her the letter. Angered, Alice grabbed a hammer and relentlessly beat the victim to death.

Judge Hall sentenced her to twenty years In prison with the possibility of parole in 10 years. 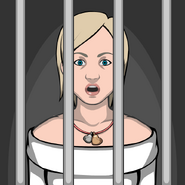 Alice, sentenced to 20 years in jail with a chance for parole in 10 years for the murder of Patricia Mills, a.k.a Trixie Velvet. 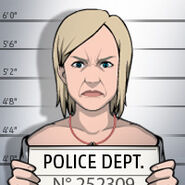 Retrieved from "https://criminalcasegame.fandom.com/wiki/Alice_August?oldid=488132"
Community content is available under CC-BY-SA unless otherwise noted.