Alfred is a 56-year-old blind hot dog vendor with brown eyes and gray hair under a white cap with the logo of his hotdog brand, Al's Hotdog. He is seen wearing a white t-shirt underneath an orange apron with a hot dog logo and a mustard stain on it. Also, he is seen wearing a pair of black sunglasses. It is known that Alfred cooks and uses detergent.

Alfred was seen when Jones and the player were searching near his hot dog stall. He knew the victim, Henry, and the two were good friends. He played a big role in helping the police in this case. He was eventually found innocent when Donald Byrd was revealed to be Henry's killer.

Alfred returned as one of the suspects in the murder investigation of Daisy. Jones and the player went to talk to Alfred after they found a greasy paper in the victim's kitchen which had "Alfred's Hot Dog" written on it. Alfred was again found innocent when Valentine Montgomery was incarcerated for Daisy's murder. In the Additional Investigation of this case, Alfred enlisted the team's help to find his waffle maker as some teenagers had stolen it. The team found it in a pile of leaves and discovered that the kids had broken it. After mending it, they gave it back to Alfred. 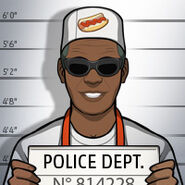 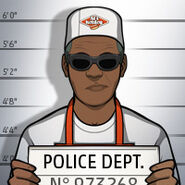 Retrieved from "https://criminalcasegame.fandom.com/wiki/Alfred_Ziegler?oldid=531681"
Community content is available under CC-BY-SA unless otherwise noted.