Alfred Lowe was a suspect in the murder investigation of his son, festivalgoer Noah Lowe, in Summer of Death (Case #6 of Travel in Time).

Alfred is a 51-year-old farmer and the father of the victim. He has balding dirty blond hair and profound wrinkles around his face. He wears a red and white plaid t-shirt under blue denim dungarees. It is known that Alfred eats granola, plays the guitar and has read On the Highway.

Alfred became a suspect after Zara and the player tracked him down at his market stall. Breaking down upon hearing about his son's murder, Alfred told the team that he knew that the hippies and the Woodstock Festival were bad influences on his son, blaming them for his murder.

Alfred was spoken to again about his son leaving home. He admitted to kicking Noah out of the house the morning before his murder when Noah confessed his love for another man. He believed Noah's homosexuality to be unnatural and wondered how and why he had turned out like that. Later, Alfred caused a scene when he made a mess backstage at the festival, taking out his emotions on the festival.

Alfred was found to be innocent after the team incarcerated Major Perkins for Noah's murder. 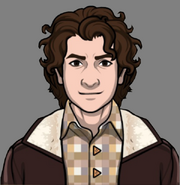 Retrieved from "https://criminalcasegame.fandom.com/wiki/Alfred_Lowe?oldid=479050"
Community content is available under CC-BY-SA unless otherwise noted.