Alfie McNaulty was the victim in Killer Takes All (Case #51 of Pacific Bay).

Alfie was a croupier of the Mennagio Casino in Paradise City and a former jewel thief. He has neat black hair and blue eyes covered by a kelly green visor. At the time of his death, he wore a forest green croupier uniform.

Alfie was found outside the Paradise City casino strip with a croupier stick jammed into his eye. On the scene, Frank confirmed the croupier stick was used as the murder weapon. Further analysis from Roxie indicated that the stick skewered his brain, killing him instantly. She managed to find residue on the stick that turned out to be from a shrimp cocktail. This meant that Alfie's killer ate shrimp cocktails.

Alfie used to be jewel thieves along with Grace O'Brien. They were caught and sentenced to jail: ever since, Alfie had led an honest life. For example, six years prior to the events of the case, Alfie was approached by Louis De Rico to keep watch at the casino for one of his heists. Alfie turned him in to the police, causing Louis to spend six years in prison.

Betty Wyatt blamed Alfie for making her lose $10,000, thinking that if he had not asked her to leave, she would have won back the money she had gambled at his croupier table. Alfie had recognized Danny Moto and had him thrown out as the casinos were getting ripped off by his mathematical skills at the poker table. Sheikh Faisal also hated Alfie for not allowing his ridiculous demands (for example, a "lucky dagger") and for catching him in the middle of cheating during a poker game.

The killer turned out to be Grace.

Upon admitting to the murder, Grace said that Alfie had refused her request to help her rob the jewelry store. She had pushed through alone anyway, but Alfie followed her, threatening to call the cops. While the robbery was successful, Grace knew that she could not trust Alfie. She then got Alfie to meet with her outside the casino that night and shoved his croupier stick in his eye to silence him. Judge Dante sentenced her to 20 years in prison. 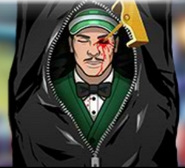 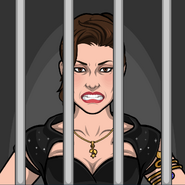 Grace O'Brien, Alfie's Killer.
Add a photo to this gallery

Retrieved from "https://criminalcasegame.fandom.com/wiki/Alfie_McNaulty?oldid=478871"
Community content is available under CC-BY-SA unless otherwise noted.