Alexandre Devereaux was a suspect in the murder investigations of three people in Travel in Time. He also made a quasi-suspect appearance in Pride Comes Before the Fall (Case #14 of Travel in Time).

Devereaux is a 22-year-old musketeer for the French court. He has green eyes as well as shoulder-length brown hair and a brown mustache and beard. He wears a long-sleeved white collared shirt with black laces in the center under a dark gray spotted vest. He also sports a blue piece of fabric with a fleur-de-lys pattern pinned onto his shirt with a golden cross pin and a hexagonal diamond pin. He also sports a dark blue hat with blue and white feathers as well as a brown-and-white necklace. He is often seen carrying around a sword with a golden hilt.

In his first suspect appearance, it is known that Devereaux uses leeches and plays the lute.

In his second suspect appearance, he sports an ink stain on the right sleeve of his shirt. It is discovered that he does fencing, eats foie gras and is left-handed.

In his quasi-suspect appearance, his shirt is seen clean again.

In his third suspect appearance, it is revealed that he is a sharpshooter, drinks fig liqueur and has gout.

Devereaux became a suspect after Nebet and the player learned that he, a Frenchman, was in London, which surprised the team due to the war between the French and the English. He explained that he was in England on official business and had been sent as King Francis I's emissary, with an important message for King Henry VIII. When asked what the message was, he explained that he had been sworn to secrecy.

Devereaux was spoken to again about his association with the Entente Cordiale Society, a group of French rebels trying to bring about a truce between France and England. He revealed that he was not an envoy for King Francis I, but instead a messenger for the Entente Cordiale Society. After he tried to persuade King Henry to call a truce, he approached Catherine at the Mangy Lion. Catherine was outraged at his supposition that she would dare go against her husband.

Devereaux was found to be innocent after the team incarcerated Agnes Manners for Catherine's murder. Later, Penelope and the player asked Devereaux if he knew where Leonardo da Vinci was. He revealed that Da Vinci was expected to appear before the French royal court two months prior, but he had never arrived. King Francis I suspected that King Henry VIII had something to do with Da Vinci's disappearance, suggesting that the team intercepted Henry's reports from his spies in order to discover Da Vinci's whereabouts.

After the team discovered that Da Vinci had been arrested by the Spanish Inquisition, they alerted Devereaux to the arrest. Shocked, he told the team that the French had no authority in Spain. However, the team did have authority as they were assuming the disguise of Swiss guards, allowing them to go to Spain to rescue Da Vinci.

Murder is No Joke

Devereaux became a suspect again after Zara and the player found his wineskin in a basket of clothes at the musketeer barracks. After he asked if Penelope had received the letter he had sent her, he was informed about the murder. He told the team that he loved Triboulet's jokes and that the victim had kept King Francis happy. He then excused himself to attend his fencing practice.

After the team found Theo's overheated pet drone, Astro, in the musketeer barracks, they found out from Theo that Astro had recorded Devereaux arguing about the victim. Answering about this, Devereaux told the team that the king had entrusted him with a very important missive, but Triboulet had taken it from him before he could deliver it. In order to retrieve the missive, he punched Triboulet, who yielded and returned the missive.

After arresting Vizier Ibrahim's killer, Penelope returned to the time machine to ask for the team's help. She explained that the Sultan had accused Devereaux of stealing the Halime stone and needed the team to clear Deveraux's name. Sometime after they did so, Penelope decided to return to the team and asked for the player's help in saying goodbye to Devereaux. Penelope told him that her father was taking her away to the Americas. When he tried to suggest that he came with her, Penelope told him that his duty was to protect the King of France. Agreeing that they would never forget each other, they embraced one last time, and Penelope left.

Devereaux became a suspect for the third time after Jack and the player found his locket in Da Vinci's workshop. He explained that King Francis had decreed that Devereaux was to represent France at the wedding between King Henry and his bride, the victim. He visited the workshop as he wanted to consult Da Vinci about constructing an automatic feeder for his horse, but found that Da Vinci was not present when he arrived. He then heard about the cancelation of the wedding and the news of the bride's murder.

Devereaux was spoken to again about him putting itching powder in the victim's bridal veil. He admitted that King Francis was concerned about the alliance between England and Florence that would be created upon the marriage. In order to sabotage the wedding, Devereaux planted the itching powder in the victim's veil. His sabotage was also intended to relieve himself of his own romantic pain as he was still heartbroken over his split with Penelope.

Devereaux was found to be innocent for the third time after the team incarcerated Cardinal Cisneros for Fiore's murder. 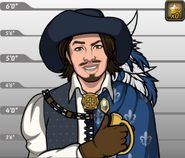 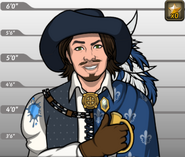 Devereaux, as he appeared in Murder is No Joke (Case #13 of Travel in Time).

Penelope Sage, Devereaux's ex-girlfriend.
Add a photo to this gallery

Retrieved from "https://criminalcasegame.fandom.com/wiki/Alexandre_Devereaux?oldid=505783"
Community content is available under CC-BY-SA unless otherwise noted.