Ambassador Alex Lange was a suspect in the murder investigation of pilot Jakobo Nkosi in Crash and Burn (Case #37 of World Edition).

Alex is the 66-year-old US ambassador stationed in Madagascar. He has curled gray hair and mustache and is seen holding a cup of whiskey. He wears a gray suit and bowtie, orange patterned dress shirt and handkerchief, and a pin of the USA and Madagascar flags to symbolize his role. It is known that Alex has hay fever, is a marksman, and is addicted to his hay fever tablets.

Alex was first interrogated after the player and Carmen found the incident report the victim wrote out to him. He confirmed he met with the victim, then sent him back to the crash site to inform The Bureau that help was on the way. He was surprised to hear of his murder, saying he usually hired the victim for official trips.

Alex was spoken to again about a photo of him on a plane with scantily-clad young women. He explained the victim took that picture, and used it to blackmail him to obtain some high-profile contracts for charter flights. Carmen was surprised to hear he decided to do it to keep himself from getting bored, but Alex said he does not restrict himself to women just to keep him going through the day.

Alex was found to be innocent after the team incarcerated Aristide Akintola for Jakobo's murder. He was to be spoken to again about a list of SOMBRA's contacts (Fabrice Kabila, Gordon Davidson, Lavinia De Brills, and Terrance Zimmerman). Lavinia De Brills was in Kenya, which was the team's original destination before they were shot down. He explained that Lavinia was the heiress to the world's largest diamond firm, making her highly influential. However, the rest on the list were spread throughout Africa. Fortunately, the team had the information they needed. 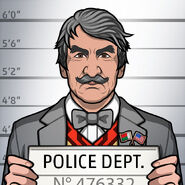 Retrieved from "https://criminalcasegame.fandom.com/wiki/Alex_Lange?oldid=407987"
Community content is available under CC-BY-SA unless otherwise noted.