Alec Howard was a suspect in the murder investigations of banker Coleen Truman in Easy Prey (Case #7 of Pacific Bay) and local girl Vanessa Kimmel in Smoke and Mirrors (Case #10 of Pacific Bay).

Alec is a 39-year-old businessman with dark brown hair with gray streaks at his sideburns. He wears a swamp green business suit, a white dress shirt underneath with a gator-patterned tie, and a Gator Land logo button on his right side.

In his first appearance, Alec sustains warts on the left side of his chin. It is known that he drinks rum and practices rifle shooting.

In his second appearance, the warts have healed and instead Alec sustains a leech bite on the left side of his forehead. It is discovered that he knows fishing and eats spicy food.

Alec was the owner of an abandoned theme amusement park called Gator Land, marked for sale by Bay Area Bank.

Alec was called into the investigation when the team found a faded document forensically powdered revealing a buying offer of Gator Land for $1.00 US, in which Amy thought the deal was for something else. Alec recognized the Coleen tragedy but showed no respect for the promising newcomer in which Amy told the businessman to address her as "Officer Young" and informed Alec about Coleen's ridiculous buying offer. Alec thought the $1.00 US deal was meant to take his park away from him by force even though the park was in debt and recognized Coleen's greed due to the nature of the buyout offer. Some of the words, like "survival of the fittest" placed Alec in the red.

Alec was called into the investigation a second time when the team found a faded trophy at Shelly Dulard's steamboat powdered to reveal Alec's hunting trophy. Since this trophy suggested Alec was able to hunt gators with ease, this made Alec a noticeable suspect as he was confirmed to have the ability to handle hunting rifles. Amy wanted to know if Alec hunted gators for sport as she found it odd that Alec would do so since he was supposed to protect alligators. Alec said that one alligator he kills gets two more in that victim gator's place and did not like Amy questioning him about his life habits. Alec even suggested that he drank Gator Rum at the hunters' shack in the Bayou, not to mention revealing more of Coleen's oppressive behavior referencing it as a "kill or be killed" situation, something that made Alec a serious suspect.

Alec was found innocent when Steve Bundy was found guilty of the manslaughter but at the time of the arrest, Bay Area Bank succeeded in purchasing Gator Land from Alec, in which Amy realized the bank found a way to pressure Alec into selling the park.

Alec found himself in the red for a second time when Amy and the player found an ultrasound in a burning brothel, and upon cracking the patient ID, sent it to Hannah for analysis. Hannah's research deduced that Vanessa was pregnant and the father of the stillborn child was discovered to be Alec Howard.

In Gator Land, Alec mourned because he loved Vanessa pretty much, which surprised even Amy. In spite of Amy alerting Alec about Vanessa's position at the brothel, Alec wanted to leave the past alone and even went far by stating that Vanessa preferred to hide in a tree hut at times--causing the team to investigate the tree hut a second time.

Alec found himself in the red once again when the team found a restored photo of him and Vanessa inside a brothel in which Amy felt like she was a fool after seeing Alec paying Vanessa for her suitress services for him--something which Alec felt lonely because he always spent time with his gators or out fishing. Alec dropped a bomb when he refused to have a baby with a prostitute, a feat which disgusted Amy, something which Amy thought Alec used women as trophies.

Although Erikah Mabayo was indicted for Vanessa's murder, Alec was in the red in the hours following the indictment after Hannah found fingerprints from a past murdered prostitute named Dolores Lovelace. Alec admitted that the fingerprints were his, but also admitted he saw Erikah burying a body in the cemetery long ago but kept quiet because he feared Erikah would ruin his life, but Alec told the team that a broken golden rose brooch could be found in the cemetery. Because Alec told the team he admitted to seeing Erikah burying someone in the cemetery long ago, Frank did not hesitate to arrest Alec for obstruction of justice by withholding vital evidence, and after impounding Alec, the team preceded to the graveyard to close the case Harvey Fitchner failed weeks before the events of this case. 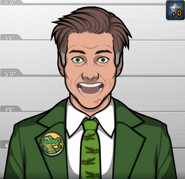 Alec, as he appeared in Easy Prey (Case #7 of Pacific Bay). 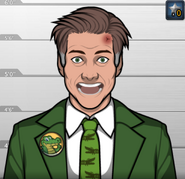 Alec, as he appeared in Smoke and Mirrors (Case #10 of Pacific Bay). 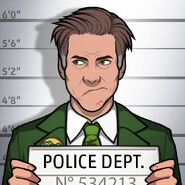 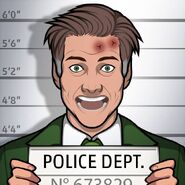 Retrieved from "https://criminalcasegame.fandom.com/wiki/Alec_Howard?oldid=501373"
Community content is available under CC-BY-SA unless otherwise noted.