Aldo Huxley, appearing as a minor character in Criminal Case, was mentioned during the events of Rebel Without a Pulse (Case #17 of Travel in Time).

Aldo is the 6-year-old son of resistance fighter Storm Huxley and his girlfriend, Sadie Kek. He has blond hair with pink and blue streaks and is seen wearing a black coat over a purple T-shirt.

After finding Aldo's drawing, in which he drew himself sick and his parents fighting, Zara and the player interrogated Sadie, who said that Aldo almost died recently due to measles. She blamed Storm for that as he had refused to get Aldo vaccinated to avoid him being put on the register of citizens so that the government would not keep track of Aldo. Upon admitting to Storm's murder, Sadie told the team that Storm was risking Aldo's life to further the resistance, sending him on missions to spy and to plant bombs during the 5th of July celebration as he would go unnoticed. Furthermore, Storm brainwashed Aldo to make him cooperate. 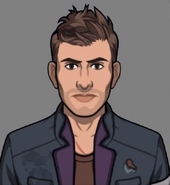 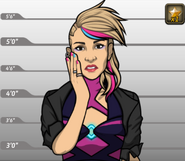 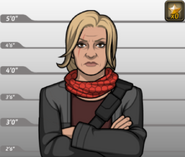 Isabelle Huxley, Aldo's grandmother.
Add a photo to this gallery

Retrieved from "https://criminalcasegame.fandom.com/wiki/Aldo_Huxley?oldid=499372"
Community content is available under CC-BY-SA unless otherwise noted.