Alcott Milton was a suspect in the murder investigation of high schooler Simon Armstrong in The Summoning (Case #26 of Grimsborough).

Alcott is an 82-year-old occult expert and radio host who has short gray hair and beard. He dons a taupe suit over a white shirt and dark moccasin vest and tie. He also has a pentagram tattoo on his neck and a scar on his right cheek. It is known that Alcott takes medication.

Alcott is the host of a radio series called Beyond the Void. He is the grandfather of a gothic high schooler named Elvira Milton. When Jones and the player were searching the local Grimsborough library, they had found occult drawings of pentagrams. The drawings had matched the symbols that were carved into the victim, Simon Armstrong's chest. Since the drawing had Alcott's name under it, the team went to have a chat with him.

When the team told the radio host that they needed help from him about a teenager named Simon who had been killed as part of an occult ritual, Alcott asked what kind of ritual it was. Since the team had no idea about regarding the nature of these rituals, they just explained to Alcott that they had a reproduction of the symbols carved into the victim's skin. After hearing this, Alcott told them that it was obviously a paganist ritual which was designed to please the spirits of the underworld so that one could regain the knowledge of their past lives. He also said that some believed it to be the first steps to claim eternal life, but those were old tales and legends. The team then thanked the occult expert and requested an autograph from him so that they could give it to Alex, who had asked the team to get it for him since he was a huge fan of Alcott and his radio series, Beyond the Void.

Later, while searching the local library's desk, the team had found a book called Book of the Dead. They then used some powder to reveal the unclear writing on the book which read, "SCREW YOU". This made the team go to Alcott and ask him about the book. When Jones asked why the strange book was insulting him, Alcott explained to him that the Arkham books were not meant to be handled like a common paperback, and told the team that they had to wait until the next full moon. He then said that he could not help the team further since the moon was not for another month. 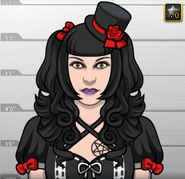 Beyond the Void, Alcott's radio series. 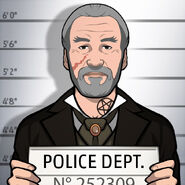 Retrieved from "https://criminalcasegame.fandom.com/wiki/Alcott_Milton?oldid=531145"
Community content is available under CC-BY-SA unless otherwise noted.