Alberto is the 23-year-old Lord of the Republic of Florence in 1515. He has chin-length brown hair and brown facial hair, as well as blue eyes. He wears a black beret with a royal insignia on it. He also wears a fur vest over a brown top with long and puffy sleeves and a red rim with golden embroidery. It is known that Alberto is a sharpshooter, drinks fig liqueur and has gout.

Alberto became a suspect after Jack and the player found the rings that he had given to his cousin and her fiancé, King Henry VIII. He claimed that the murder would cause an international crisis and revealed that the wedding was a sudden development that would seal an alliance between the Kingdom of England and the Republic of Florence. He then informed the team to the whereabouts of Henry.

Alberto was spoken to again about him breaking a symbol of his cousin's marriage. He explained that, although he was initially overjoyed about the wedding, he realized that Henry viewed him as a weakling that he could easily manipulate. Henry planned to use the marriage to seize power over Florence, so Alberto needed the marriage to be stopped.

Alberto was found to be innocent after the team incarcerated Cardinal Cisneros for Fiore's murder. 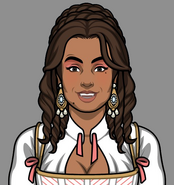 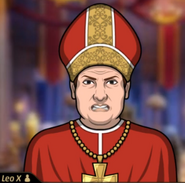 Leo X, Alberto's uncle.
Add a photo to this gallery

Retrieved from "https://criminalcasegame.fandom.com/wiki/Alberto_de_Medici?oldid=541419"
Community content is available under CC-BY-SA unless otherwise noted.