Alberto "Al" Salucci was a suspect in the murder investigation of witness Vinnie Costa in Blood Bath (Case #29 of Mysteries of the Past).

Alberto is a 52-year old saloon owner. He has graying black hair, a mustache, and a goatee. He wears a striped silver coat over a dark gray vest and white shirt with a gray bow. It is known that Alberto drinks whiskey punch, likes Buffalo Bill and plays poker.

Alberto became a suspect after the player and Maddie found the threat he had sent to the victim on a matchbox, covered in his fingerprints. After being berated for neglecting to tell the Squad about his grudge against Vinnie, Alberto was informed of the murder. Alberto scoffed at their attempt to unnerve him, but then gave the pair permission to investigate the saloon bar, before trying to tempt them with a drink.

Alberto was spoken to again after Viola found traces of his mustache wax on the victim's wallet. Alberto revealed that he stole the wallet as revenge for Vinnie cheating him at cards, making him lose money and look like a fool. Upon being accused of killing Vinnie, he replied by venting his frustrations, saying that the money he stole was owed to him.

Alberto was found to be innocent after the team incarcerated Clay Westwood for Vinnie's murder. 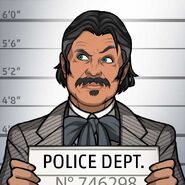 Retrieved from "https://criminalcasegame.fandom.com/wiki/Alberto_%22Al%22_Salucci?oldid=415387"
Community content is available under CC-BY-SA unless otherwise noted.