Alam Somalinggi was a suspect in the murder investigation of his sister, SOMBRA recruit Riaja Somalinggi, in The Sweet Escape (Case #33 of World Edition).

Alam is a 25-year-old local fisherman and brother to Riaja. He has black hair and facial hair, and a black bandana wrapped around his head. He dons a dirty white tank top with a red sarong over his shoulder. He is usually seen carrying around some fish tied to a stick. It is known that Alam is left-handed, takes jamu, and plays Congklak.

Alam became a suspect after the player and Jack identified him from a picture of him and the victim. He was saddened at hearing his sister's death, saying it was his job to protect her, but he failed. When asked about what had happened to her, he said he had no idea. His sister had become unpredictable in her teens. Alam said she even went missing for months and all he could do was wait for her return. However, Alam said he had no idea what his sister was up to, but he felt touched when his sister held onto the toy monkey he gave her when they were kids. He asked them if they had found the toy, but Jack said they would keep an eye out for it.

Alam was interrogated again regarding a broken hand mold of him and his sister's hands found in the jungle. He reminisced about the day he and his sister made it, and pointed out it was before she changed. When Jack asked what about her changed, Alam said his sister stopped helping him with any work. Despite him offering work and wanting to play, she refused on all counts. This angered Alam, who told the victim to find a husband to provide for her, which was when he broke the mold.

Alam was found to be innocent after Maya Salim was incarcerated for the murder. 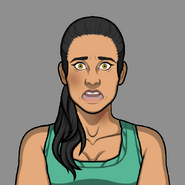 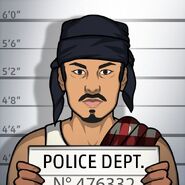 Retrieved from "https://criminalcasegame.fandom.com/wiki/Alam_Somalinggi?oldid=518637"
Community content is available under CC-BY-SA unless otherwise noted.