Aidan Moran was a suspect in the murder investigation of Irish immigrant Harriet Patrick in Slash and Burn (Case #2 of Mysteries of the Past).

Aidan is a 25-year-old sailor. He has short blond hair, along with a stubble and some chest hair, and wears an orchid blue sailor uniform that comes with a matching cap. It is known that Aidan plays the fiddle, wears Wellington boots and eats beef and stout pie.

Aidan became a suspect after the player and Isaac identified him from a picture signed to the victim. He was shocked at hearing about Harriet's murder, wondering who would kill someone so sweet. When asked how well he knew her, Aidan said that he met her on the boat coming to America, and he felt it was love at first sight. He gave the photo to her to remember him by, but he never saw the victim again after that.

Aidan was interrogated again after the victim's locket was found amongst his belongings. He confessed that he saw her again, plus he also confessed his love to her. However, the victim rejected his advances so he ended up roughing her up and ripping off her locket in the scuffle. Isaac was appalled that he would do something like that to a lady, and warned him he should watch himself.

In the end, Aidan was found to be innocent after the team incarcerated Colin James for Harriet's murder. 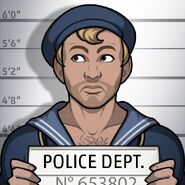 Retrieved from "https://criminalcasegame.fandom.com/wiki/Aidan_Moran?oldid=415317"
Community content is available under CC-BY-SA unless otherwise noted.