Aicha is a 31-year-old immigration officer who has brown hair tied to a bun. Aicha sports a microphone-esque device on her right ear, wears a gold generic necklace, and a blue jean coat with pockets with an "Immigration Service" badge on her right.

In her first appearance, it is known that Aicha drinks vodka and practices acupuncture.

In her second appearance, it is discovered that she eats lasagna and drives a scooter.

In her third appearance, it is revealed that she is right-handed, had an organ transplant and speaks Chinese.

Aicha is an immigration officer of Sultanistani descent.

Aicha was called in for interrogation the moment Hannah was done analyzing Ling's immigration document (found in Yuan's Garden), in which Hannah's findings discovered those documents denied by Aicha.

The team presumed Aicha was consumed with anger after Ling opted to set foot in Inner City without Aicha's permission, in which Aicha harbored fears of Inner City becoming a global hub for illegal immigration. Amy felt Aicha was harsh in her decision-making strategies.

Aicha was called in a second time when the team found a broken camera in Little China. The camera was pieced together and sent to Hannah for analysis. Hannah's analysis confirmed Aicha to be the camera's owner, in which Hannah claimed Aicha used the flying camera as a stalking tool.

Amy did not hesitate to inform Aicha about her illegal spying antics but Aicha refused to work with just a handgun and a notepad. Aicha justified her use for the flying camera, declaring herself as the law—a bold statement which solidified her visa denial decisions final.

Although Aicha was found innocent when the killer was arrested for grand homicide, she found herself in trouble when Hannah found Yuan Wong's passport to be authentic in spite of Aicha's accusation of Yuan's citizenship status in Inner City.

Aicha was in trouble when Amy and the player found an old Daily Dawn article about Aicha's quest to curb illegal immigration in Inner City, in which the newspaper was found in the Grand Central Station near Little Italy. Aicha admitted being on the front page of the article since Vito and herself were on the same page as far as illegal immigration was concerned, but Amy told Aicha she was exaggerating since the article was published before the case took place.

Aicha was approached by the police once again when Amy and the player found a torn love letter pieced back together with a love message in which Aicha would not live without Vito for certain reasons. Aicha was not happy when Amy and the player presented her with the restored love card as she had to go through the trouble of admitting her love for Vito in front of others. All Vito wanted was to get Aicha's views on illegal immigration to make superb stories for the Daily Dawn and Vito only used Aicha to sell papers as the love story was actually a driving business for Vito to cover illegal immigration—a feat which Aicha labeled Vito's love being fake.

Aicha was innocent a second time when the ultimate roller coaster ride took place in the courtroom.

Aicha found herself in trouble after the team found Nikolai's list in Sue Xiong's headquarters analyzed by Hannah—in which Hannah stated the crossed-out names were immigrants expelled from Pacific Bay a week before the case took place. Afterward, Hannah suggested the team to talk to Aicha regarding Kamarov's list of Chinese immigrants marked for expulsion.

Aicha was not too pleased when the player treated her as a suspect for the third time but Frank demanded answers in correspondence to Kamarov's list Aicha used to expel Chinese immigrants out of Pacific Bay. Aicha could not expel people alone without Nikolai's help, but Frank did not like the idea of an immigration officer allying with the Russian community to thin the Chinese community—a feat that made Aicha counter she would only expel those who didn't hold certified papers.

Aicha was approached by Frank and the player a second time when a paper of Aicha's family members were expelled back to Sultanistan was found at the Chinese Festival. Aicha was furious when the team showed her a document of her family members expelled back to Sultanistan because while there were illegal Chinese immigrants running wild, there were also a good amount of illegal Russian immigrants on Pacific Bay soil as well, and Nikolai did not like the idea of Aicha filing reports of those illegal Russian immigrants to mark for expulsion. In retaliation, Nikolai stopped Aicha from filing her expulsion report of illegal Russian immigrants and made an expulsion ballot consisting of Aicha's family. Aicha told the team her job was never clear-cut because any immigrant who was on the expulsion list was to leave Pacific Bay immediately, but not without Aicha admitting she had a heart defect when she was born—grounds for the Ben Malek family to move to America for a heart transplant—flagging her as someone who had an organ transplant, but she was proud of her status as an American citizen for a long time.

Aicha was found innocent a third time once the killer was indicted for their gross agenda. 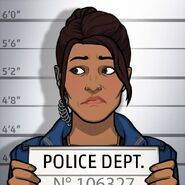 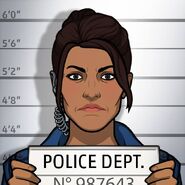 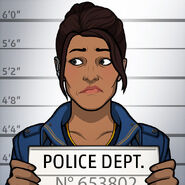 Retrieved from "https://criminalcasegame.fandom.com/wiki/Aicha_Ben_Malek?oldid=484111"
Community content is available under CC-BY-SA unless otherwise noted.