Ahmet was a suspect in the murder investigation of shop owner Radovan Radich in Eastern Promises (Case #13 of Pacific Bay).

Ahmet is a 12-year-old homeless boy living on the streets of the bazaar. He has messy black hair, a missing tooth and several bruises and stains on his face. He wears a tattered t-shirt and has a necklace around his neck. It is known that Ahmet smokes shisha pipe and uses bathing salts.

Despite being 12 years of age, Ahmet was interrogated by Pacific Bay authorities for the first time when Hannah analyzed Radovan's footage of Ahmet shoplifting at Pipe Dreams (Radovan's shisha shop). Hannah had no trouble matching Ahmet's description from the young offenders database. Ahmet refused to talk to Frank and the player, but Frank demanded full cooperation during Radovan's murder investigation, of which Ahmet felt joyous since Radovan followed Ahmet every time he was caught shoplifting. To Frank, it seemed Ahmet did not like the world at all.

Ahmet was subdued by the team after the player found him to have torn apart a school brochure (pieced together and fingerprint-analyzed by the player). Ahmet harbored disgust over schooling requirements for children. He lambasted the team for restoring the school brochure, and took time to criticize them for wanting him to be locked in a classroom instead of smoking shisha pipes, much like Radovan would. Frank believed schooling would improve Ahmet's life, but Ahmet snapped at the team when he heard Frank's words.

Ahmet was declared innocent after the killer was incarcerated of grand homicide, but pleaded with the team to protect him from a "giant pineapple" following him, given he stole a bag from the Body & Beauty Hammam & Spa (a place from which Ahmet was banned), so the team went to Body & Beauty to get the bag Ahmet left. After careful examination, the bag was surprisingly revealed to belong to Ramirez, who also turned out to be the "giant pineapple" who followed Ahmet. Both Ahmet and Ramirez agreed not to be in contact with each other again, after Ramirez was handed his bag back by Ahmet. 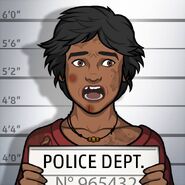 Retrieved from "https://criminalcasegame.fandom.com/wiki/Ahmet?oldid=451741"
Community content is available under CC-BY-SA unless otherwise noted.