Agwé was the 17-year-old apprentice to voodoo priestess Jemimah Mabayo on Skull Island. He had short black hair and brown eyes. He wore a necklace made of brown, gold, yellow and gray rocks. At the time of his death, he wore a dark beige shirt and black trousers.

Agwé's body was found floating in the water with his head bashed in. Janis revealed that Agwé had been involved in a fight prior to the murder. She also deduced that the blow to the head had killed him as there was an absence of water in his lungs. Furthermore, she found traces of hardtack on the glass shards embedded in his skull, allowing Janis to conclude that the killer ate hardtack.

Later, Jack and the player found a broken bottle near shopkeeper Derek Trollope's stall. They collected a sample of bloody sand from the bottle and dispatched it to the lab. Janis confirmed that the blood was the victim's which meant that the bottle was the murder weapon. She also found traces of a second blood type, allowing Janis to conclude that the killer had O+ blood type.

Shopkeeper Derek Trollope thought of Agwé as a son, but when several of his customers demanded refunds on the fake talismans that Agwé gave to him, Derek stole his money back from him. Black Sparrow Captain Mary Read discovered that Agwé had stolen the late Captain Blackbeard's hat from her ship, and crewman Jorge de la Cruz was overwhelmed by Agwé's neediness after becoming friends with him. Voodoo priestess Jemimah Mabayo was furious that Agwé had turned his back on voodoo and T.I.M.E. Junior Temporal Agent Zara punched Agwé when he refused to let her wake up Jemimah from her trance.

The killer turned out to be Jorge.

Jorge admitted that in the two days they were on the island talking to each other, he started falling in love with Agwé. After Agwé tried to kiss him, he panicked as he knew homosexual acts were not approved by pirates. He then bashed Agwé's head in with a cognac bottle, intending to scare him but killing him instead. Captain Mary Read then removed Jorge from her crew, ordering him to stay behind on the island to await the voodoo gods' punishment. 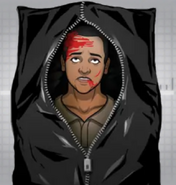 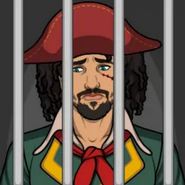 Retrieved from "https://criminalcasegame.fandom.com/wiki/Agw%C3%A9?oldid=500992"
Community content is available under CC-BY-SA unless otherwise noted.