Agrafena Raskolnikova (Rus: Аграфена Раскóльникова) was a suspect in the murder investigations of four different people in the World Edition.

Agrafena is a 25-year-old activist-turned-senior assistant for the Unified Nations in her latest appearance. She has green eyes, long blonde hair, and a mole near her nose.

In her first appearance, she wears a black T-shirt designed only with a fuchsia-colored fist. She wears her flower crown, and has writings on her arms spelling out "I AM FREE". It is known that Agrafena plays piano.

In her second appearance, she dons a gray pashmina with a green peace symbol badge. It is discovered that she smokes cigarettes and eats pelmeni.

In her third appearance, she has a bandage on her right cheek. It is revealed that she eats beshbarmak.

In her fourth appearance, she now dons a black blazer over a white high-collared blouse and is seen holding a sepia brown tablet. The writings on her arm are gone, and her hair is now neater. It is noted that she spends time with Alaskan malamutes.

Agrafena became a suspect after Ingrid informed the player and Carmen she was celebrating the victim's death by Bank Bridge. She said she only protested and used Mikhail's name as an example, but that did not mean she killed him. Carmen was suspicious of her as Agrafena mentioned nine other people besides Mikhail should go down, but she said people can not answer for their crimes against civil liberty if they are dead.

Agrafena was interrogated once again regarding a virus she sent to the victim's laptop. According to Elliot, she basically shut down the victim's computer not allowing him to do anything with it. She explained Mikhail was helping nine Russian senators draft a law allowing the government to spy on Russian citizens from space. Carmen realized those nine senators were the ones she mentioned earlier and believed Agrafena did have a hit list. However, Agrafena said she was only going to send the same virus she sent to the victim, nothing more.

Agrafena was found to be innocent after the team incarcerated Dmitri Lermontov for Mikhail's murder. However, she had to be interrogated again regarding her research into Global Flux Ltd, which was a disguise for SOMBRA. She said the name kept showing up as she was researching government spying, and following it led to Dmitri Lermontov's estate. She went on to say business interactions between Dmitri and Global Flux Ltd were being negotiated at the estate, prompting the player and Carmen to investigate there again.

Agrafena became a suspect again after Carmen and the player found her diary outside the train. She was surprised to see them on the train, wondering if they were following her. When informed of Ilya's murder, she was excited saying he was everything that was wrong with the country. She believed that since he was a diamond magnate, not all of his business was legal.

Agrafena was spoken to again regarding a smoke bomb that was found outside of the train. She said she had that bomb so she could use it against the victim, to shake him up a bit. Carmen pointed out how that made her even more of a suspect, which was why Agrafena threw it away in the first place, so it would not be a misunderstanding.

Agrafena was found innocent of murder again after the team incarcerated Nikita Rukhin for Ilya's murder. But Agrafena found herself in trouble regarding the theft of Elliot's phone, which was connected to his laptop, with all their information stored on it. According to Elliot, she tried to access the files that were related to SOMBRA. She said she hacked into their computers because she believed SOMBRA was just made-up so the government could spy on them. Carmen was furious, saying accessing confidential information is not a civil right but a crime; and if it were not for the player and Elliot stopping her from causing any real damage, she would have been arrested on the spot.

Agrafena became a suspect again after the player and Jack found traces of rose pollen on a protest sign of the victim, both that were linked to her. She said Vitaly was the one behind the law that would allow the government to spy on Russian citizens, the same one she explained back in St. Petersburg. Since Russia launches satellites from Kazakhstan, she believed Vitaly would arrive sooner or later. She wanted to confront him regarding his horrible civil liberties record and cut him down to size. When informed of the senator's murder, she simply said she would not shed a tear for him, but was not the kind of person who resorts to murder.

Agrafena was interrogated once again regarding the victim's note to her on a receipt saying the security committee was watching her. She said she saw the victim at a restaurant at the tower, he then came by her table and slipped her the note. The minute she saw it, she believed her suspicions regarding the government's plans for the satellite were true.

In the end, Agrafena was found to be innocent after the team incarcerated Yelena Tereshkova for Vitaly's murder.

Agrafena became a suspect once again after Carmen and the player found her UN badge at the weapons facility. Carmen was surprised she decided to move up in the world, Agrafena just explained that protesting in the streets just kept making her a suspect in murder investigations. She explained she was the senior assistant to the victim, assigned to him and the mission to inspect the weapons facility. But she was worried that she could lose her job due to becoming a suspect again.

Agrafena was spoken to again about the bomb she planted at the crime scene. She dropped her act from before, saying that she was trying to make a change from the inside, but she could not change a thing. But what crossed the line for her was the opportunity for the CEO of Bearing Straight to butter the victim up. She made the bomb and set it up at the chalet to prove a point, but had no intention of detonating it despite it being deadly.

Once again, Agrafena was found to be innocent after the team incarcerated Joel Heller for Niilo's murder. 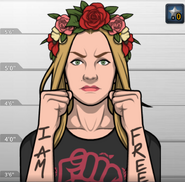 Agrafena, as she appeared in Only Truth Remains (Case #14 of World Edition). 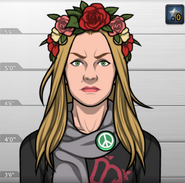 Agrafena, as she appeared in Fast Track to Murder (Case #16 of World Edition). 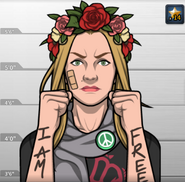 Agrafena, as she appeared in Countdown to Murder (Case #18 of World Edition). 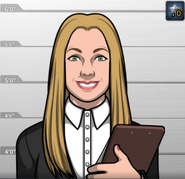 Agrafena, as she appeared in Double Trouble (Case #52 of World Edition). 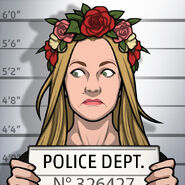 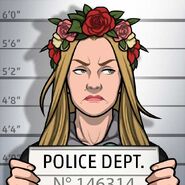 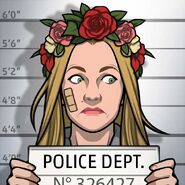 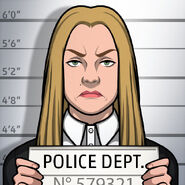 Retrieved from "https://criminalcasegame.fandom.com/wiki/Agrafena_Raskolnikova?oldid=498027"
Community content is available under CC-BY-SA unless otherwise noted.