Agnes Manners was the killer of Queen Catherine of Aragon in A Tudor Murder (Case #11 of Travel in Time).

Agnes is the 51-year-old owner of the Mangy Lion, a London tavern. She has black eyes and red hair tied back in a bun. She is seen wearing a white shirt with rolled-up sleeves underneath a purple vest. Additionally, she sports a gray patch on the right side of her shirt, and smallpox traces below her right collarbone. She also has a missing tooth. It is known that Agnes uses leeches, plays the lute and eats wild boar.

Nebet and the player first met Agnes at the Mangy Lion when beggar Dudley suggested to the team that they searched the tavern as he had seen Catherine there. However, Agnes denied Catherine's presence at her tavern.

Agnes became a suspect when the team found Catherine's goblet at the tavern, proving that she had been at the tavern, despite Agnes' protests. She confessed that Catherine had wanted her to keep her visits to the tavern a secret. She believed that the atmosphere at the Mangy Lion was genuine, unlike her false-hearted courtiers. She then pointed the finger at King Henry VIII when she suggested that the team looked closer to home to find the killer.

Agnes was spoken to again about her vandalizing the victim's portrait. She admitted that, despite her love for the Queen, she was fed up with her complaining all the time about the condition of the tavern. Enraged by Catherine's attitude, Agnes disfigured a painting of her in retaliation.

In the end, it was proven that Agnes was Catherine's killer. Agnes admitted that she overheard French musketeer Alexandre Devereaux discussing the possibility of a truce in the Franco-English war with Queen Catherine. Agnes felt betrayed, as she had already lost two sons in the war. Thus, on her hot cross bun delivery to the Queen, Agnes grabbed a morning star mace and bashed Catherine in the head, despite Catherine actually denying the truce agreement. King Henry had Agnes thrown into the dungeon until he could decide on her real punishment. 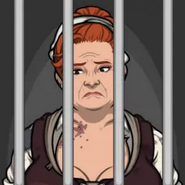 Agnes, thrown into the dungeon until King Henry VIII could decide on her real punishment for the murder of Catherine of Aragon.
Add a photo to this gallery

Retrieved from "https://criminalcasegame.fandom.com/wiki/Agnes_Manners?oldid=490816"
Community content is available under CC-BY-SA unless otherwise noted.