Agent Z is a 45-year-old secret agent who dons a pair of sunglasses with a fancy black suit (with a black tie) complementing his appearance. He has a communicative earpiece to complement his secret agent look.

In his first appearance, he has an oil stain on his clothes. It is known that Agent Z has asthma.

In his second appearance, he has a scorch mark on his neck and it is discovered that he wears army boots.

In his third appearance, it is discovered he owns a cat, takes anti-radiation pills and drinks martinis.

The first time Agent Z butted heads with the Pacific Bay Police Department was when Hannah traced a microfilm (found in a Rhine Canyon laboratory) pointed to the Government Investigation Authority, an obscure police agency in charge of national security. Agent Z was not happy when the team summoned him by unlawful means, suggesting he would not permit such a move going forward. Amy told the secret agent about the microfilm found in Bruce Green's lab in which she told Agent Z he was tasked in spying on the victim. Agent Z felt that the team were seeking to exploit the GIA, so he had to report the team's behavior to his superiors in an instant. All Agent Z wanted was to protect Bruce from harm, although Amy informed the secret agent it was short-lived.

Hannah had a high amount of difficulty analyzing a high-tech phone with the same encryption strength shared with the microfilm that summoned Agent Z to the team's radar earlier on. The phone was programmed to self-erase after minutes of inactivity, but not without Hannah intercepting an order for Agent Z to stop Bruce from selling research to outsiders. Again, Agent Z was not happy about the team's findings albeit Amy demanded answers from the reluctant spy. All Agent Z admitted that he had to ensure Bruce was not selling sensitive research to untrusted parties, as the secret agent flagged Bruce as a traitor to the United States. Amy did not trust Agent Z at all, so if she had enough evidence from the investigation to prove he was the murderer, Agent Z would be removed from the GIA.

Although Agent Z was innocent of homicide, he was caught in the middle after agents before him were involved in ensuring Chief Marquez was not spreading rumors about seeing aliens when she was around six years of age. He explained that his mission was to interview anyone that claimed to have seen an alien in Rhine Canyon, and he suggested to ask the chief herself about her experience.

Agent Z was flagged as a suspect once again when Frank and the player found his tracker among Colonel Spangler's box of weapons. Although he was reluctant at first, Agent Z told the team that he was tracking the colonel because the latter had stolen materials from his research and development site for a personal agenda. Reminding the team of how the GIA is sensitive about secrets, Agent Z went on to claim that he didn't take any chances. He had no reaction to hearing about Spangler's death, saying that the latter was not a problem any longer.

Frank had signaled Agent Z again when the team found a poster signifying a manhunt for Colonel Spangler. The secret agent told the team that he had looked all over the desert to find the alien Spangler had told him about. When asked for more information about the alien conspiracy, Agent Z declined to give out more information.

Even though Agent Z was found innocent of Colonel Spangler's murder, he was found in the red when Frank and the player found torn pieces of paper in his briefcase. After piecing it back together, the paper revealed that the alien Spangler had kept hidden could be any human being. After the player promised the agent to not say a word, Agent Z backed up the evidence by saying the alien could be anyone, even the player. He then told the player that if they saw anyone acting suspicious, they would call the GIA so that they could recapture the alien—something Colonel Spangler did not want to happen.

Although thought to be a bad guy throughout Rhine Canyon, Agent Z congratulated the team for averting an inter-galactic war with planet Krep-9. Moreover, he asked for permission to out to the player that the "Government Investigation Authority" is in fact the "Galactic Intelligence Agency", a covert organization working to promote peace between Earth and other planets. He politely asked the team to look into the flash to ensure that the Pacific Bay Police Department only remembers memories of the murder investigations throughout the canyon. For the player's diplomatic actions in extracting Krep-9 remnants, he announces that Innovation Valley will be the next district of duty to which Chief Marquez made official.

Although not a serious suspect in the case, Agent Z did become a suspect in another investigation after he was spotted at the crime scene. Due to the events in Rhine Canyon, Amy did not remember him, but that did not matter to Agent Z as he needed to speak with them immediately. He said the GIA believed that Meteor Systems was up to something big and that it needed to be stopped. Amy asked what they should do, and Agent Z said they needed to back into the bunker to uncover their master plan. He went on to say that if Meteor Systems was not stopped, it could be the end of Pacific Bay, or even the world.

Agent Z had to be spoken to again after they found out the GIA had been working with Meteor Systems. Plus, the GIA wanted to destroy all traces of them working together. The two of them had been working for years researching and developing alien technology, and Karen stole some of that technology for her own use. Once that occurred, the GIA pulled out of the project, and they assigned Agent Z to erase all traces of their agreement. When Amy asked if erasing Karen was part of the mission, Agent Z just said that all that matters is stopping Meteor Systems, or it could mean the end.

Agent Z was found innocent after evidence pointed towards Alden Greene as Karen's killer. But the team spoke to him regarding the location of the super computer. He applauded the player for locating Tesla, and managed to point out his location for them. He went on to say that the GIA appreciated what the player is doing to stop Tesla from destroying Pacific Bay, and warned them not to trust anything Tesla might tell them.

Agent Z was somehow mentioned by Jack Archer when telling the player about them being a fit for the world's top police force—simply known as The Bureau. To this day, not even the player knew why Agent Z would want the player to uphold the law all around the world. It was possible that Agent Z saw a lot of good in the player throughout Pacific Bay in spite of him butting heads with them in Rhine Canyon. Thus, it would seem that Agent Z had this respectable honor for the player. Although Agent Z did not make an appearance, his role in recommending the player to Jack was considered a significant move for the secret agent. 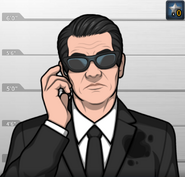 Agent Z, as he appeared in The Seeds of Death (Case #41 of Pacific Bay). 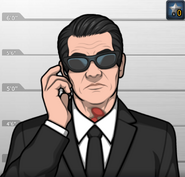 Agent Z, as he appeared in The Ties That Bind (Case #44 of Pacific Bay). 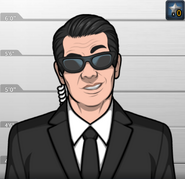 Agent Z, as he appeared in The Sting of Death (Case #58 of Pacific Bay). 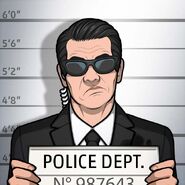 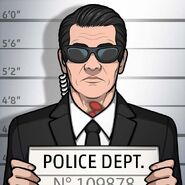 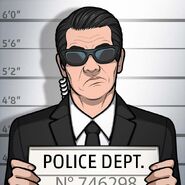 Retrieved from "https://criminalcasegame.fandom.com/wiki/Agent_Z?oldid=407980"
Community content is available under CC-BY-SA unless otherwise noted.