Agent Riordan is an agent working for the FBI. He has blue eyes and is bald. He wears a suit over a white shirt and a blue tie. He also has his FBI badge, as long as a pin of the United States flag.

In his second appearance, he is seen wearing a pair of sunglasses.

After 12 hours, Agent Riordan came back to get the rights to the investigation. However, Jack informed him that they already had enough evidence to arrest Agent Stafford's killer.

Agent Riordan first came along with his partner to arrest Marina, suspecting her of conspiring with her mother, Natasha Romanova, in the kidnapping of President James Hewett. They said that they had orders (which turned out to have come from Vice President Sarah Bennett) to do so and threatened Jonah with arrest as well after he tried to break Marina out.

Even later, while Sarah was being arrested after the evidence pointed to her, Riordan and his partner protected the vice president after she told them to take Jack and the player away. The two forced the Bureau cops to either stand down or get arrested. The cops then left the vice president's office after she had escaped. 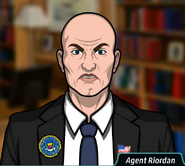 Riordan, as he appears in Politically Incorrect (Case #53 of World Edition). 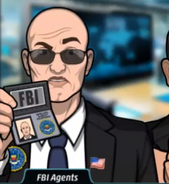 Riordan, as he appears in The Darkest Hour (Case #56 of World Edition).
Add a photo to this gallery

Retrieved from "https://criminalcasegame.fandom.com/wiki/Agent_Riordan?oldid=533023"
Community content is available under CC-BY-SA unless otherwise noted.