Agatha Christmas was a suspect in the murder investigation of local weatherman Clifford Grady in Cloudy with a Chance of Murder (Case #19 of Pacific Bay).

Agatha is a 62-year-old lady with brown eyes who has brown hair with blonde highlights in it. She sports a pair of pearl earrings, and dons a pink frock with a light pink flower design. She is shown to have a pearl bracelet on her right wrist, and is seen holding a picture of one of her deceased cats with a black ribbon going through the top right corner of the picture. It is known that Agatha has cats and eats Cajun food.

Agatha is the landlady of the late Clifford Grady.

Agatha was too scared to see the shadowy figure who broke in Clifford's apartment although she knew that Clifford would die one day horrendously. According to Agatha, people had been sending death threats to Clifford even egging his courtyard for a possible lack of coverage of Hurricane Yves. This made Agatha fear for her life and her beloved kittens.

Agatha found herself in trouble again when Hannah analyzed a complaint letter in which it was pressed against Clifford for the terrorization of animals, specifically cats and kittens. When Amy and the player approached Agatha about Clifford's transgressions, she stated that her kittens would face a hard time living without the mother of those kittens, but Amy wanted Agatha to water down before her rage went out of hand. Agatha told the team Clifford claimed to be allergic to cats, but knew the weatherman would kill a cat given his feelings of discontent of cats, something which made Agatha believe Clifford went too far on the cat affair.

Agatha was found innocent when the killer was impounded, but even though she took care of James and Lily, she found herself unexpectedly caught in the middle of a serial killer on the loose, a returning serial killer known as "The Puppeteer" who was currently wanted by the city of Pacific Bay for the death of numerous innocents, most noticeably for the death of Yann's parents sometime during the 1980s. 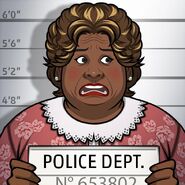 Retrieved from "https://criminalcasegame.fandom.com/wiki/Agatha_Christmas?oldid=477421"
Community content is available under CC-BY-SA unless otherwise noted.