Adrienna is a 27-year-old harlot. She has long, wavy blonde hair and silver hoop-shaped earrings. She wears a red corset with black lace details and a jewel, and also dons black lace gloves and a black choker with a red rose. She holds a black whip in her right hand.

In her first suspect appearance, it is known that Adrienna eats oysters and candy apples.

In her first quasi-suspect appearance, her bangs are slightly longer and her gloves have less lacing.

In her second suspect appearance, it is discovered that she smokes opium.

In her third suspect appearance, she dons a blue corset, a cowgirl hat and a choker both adorned with white roses, and a pair of white laced gloves. It is revealed that she rides horses, uses snake oil and eats beef jerky.

In her second quasi-suspect appearance, her height decreases to 5'1", she wears a yellow corset and dons a yellow rose on her choker.

In her fourth suspect appearance, her height returns to 5'3" and it is noted that she chews gum, wears Eternal Youth Cologne and drinks whiskey.

Adrienna became a suspect after Isaac and the player found her bracelet. She confirmed that she was the lady the victim, Kristopher Bauer, was with before he died and asked if they had caught his killer. She didn't see who killed Kristopher because she ran away. After their session, she assumed that he left the building but instead found him dead. Adrienna ran away because she was afraid that she would be blamed because the first person on the scene is usually presumed to be guilty. When asked if anything out of the ordinary occurred during her encounter with the victim, she said that he was nice enough and that it went by quickly.

Adrienna was spoken to again when the victim's wallet was found in her bag. She admitted that she stole his wallet. Kristopher had always underpaid her and Madam Xiang wouldn't make up the difference even when she asked. Madam Xiang said that she should be happy enough as-is. When she saw an opportunity for a fresh start, she took it, which is why she stole the wallet.

Adrienna was found innocent when the team incarcerated Elias Willingham for Kristopher's murder.

After arresting Davy Byrne's killer, Adrienna was spoken to by the player and Katherine Woolf for information regarding the Scarlet Slayer, who was responsible for the disappearances of several prostitutes. Though she was surprised to see the player, she explained that more girls would disappear everyday, then end up dead. She believed the Italians were behind it, considering that Sinner's End had been under the control of their sworn enemy, the Irish. She left it at that and walked away, hoping she would live to see another sunrise and not end up a victim of the Scarlet Slayer.

Adrienna became a suspect again after Maddie found her whip in the Flanagans' office. She said her boss wanted to see her for her annual performance review. As for the recent murder, she wondered why they would even investigate it considering the havoc the victim, Fiona Flanagan, caused as the Scarlet Slayer. But she said she and the other girls were glad she was dead, and that they would dance on her grave to celebrate.

Adrienna was spoken to again about a dead prostitute named Celia Barnes and her relationship with Fiona. She said Fiona seemed fond of Celia, and took her under her wing. But when Celia caught syphllis, she paid for the doctor to come and stayed at her bedside until she died. After Celia's funeral, Fiona disappeared for a while, and around the time she came back was the time she began killing prostitutes.

In the end, Adrienna was found innocent again after the team incarcerated Finley Flanagan for Fiona's murder.

Adrienna became a suspect for a third time after the player and Isaac found a paddle belonging to her at the victim's house. She explained that she left the Moulin Rose after Marla de Paradis took over and tried to make everyone into dancers. But Adrienna was more comfortable with the profession she had now, and was offered a deal by Vittorio Capecchi, so she took it. Since Vittorio was dead, Adrienna had no idea what would happen to her now.

Adrienna was spoken to again about a note she wrote which detailed the victim's movements. She said she was always loyal to the Irish, and when she was given a job working for Vittorio she took the opportunity to spy on him. But her loyalty to the Irish did not extend to killing him; she claimed she made love, not war, and that she was unable to send the note anyway.

Adrienna was found innocent once again after the team incarcerated Seamus O'Neill for Vittorio's murder. She was later spoken to again about a supposed hint, a code written on a bust. Once she heard it was engraved on a bust, she instantly knew what it meant. The code was for Vittorio's safe, one that she had been looking for weeks. It was located in the chapel, where Vittorio always went to "ask God for advice", but she knew the truth. Isaac and the player then went to search for the safe in the chapel.

After the arrest of Mario Fortuna's killer, Adrienna was spoken to after her fingerprints were found on a lighter bearing the Irish insignia. The player and Isaac asked her about Seamus's whereabouts, to which she revealed that he was the new leader of the Irish gang, explaining why he was broken out of prison. After being grilled further, she refused to tell them where Seamus was.

Adrienna became a suspect once again after the player and Maddie found her business card on the crime scene. She was shocked to hear of Seamus' death, saying she was only at the train station to hand out a few business cards, coming home after a long night of work. It made her worried considering the ongoing gang war that no one would be able to lead the Irish gang since Seamus was murdered.

Adrienna was spoken to again about a map of the area which points to the Capecchi's old home, with a message to the victim. She explained that despite everything she had done to prove her worth to the Irish, including getting close to Vittorio Capecchi, nothing seemed to satisfy Seamus. Though she did a lot of work and obtained plenty of secret information, the victim had troubled trusting Adrienna. Even after finding the Capecchi's old home, it still was not enough.

In the end, it was revealed that Adrienna was the one behind Seamus' murder. Initially denying involvement, Adrienna admitted to the murder. She said that she knew of Seamus's affair with Giulietta, which she saw as him betraying the gang. Angry, she bashed his head in with a standing ashtray. To set an example for the rest of the Italian and Irish gang, Judge Lawson sentenced Adrienna to life in prison without parole.

Later on, Isaac and the player interrogated her to make sure the Irish gang had nothing left up their sleeves. Though she was reluctant, seeing as though she would be spending the rest of her life in prison, she eventually acquiesced. Since Finley Flanagan was in jail and Seamus was dead, there was no one left to lead the gang, and they were essentially finished. However, Adrienna told them to look more into the Italian gang, as she found something important at the Capecchi's old home, prompting the player and Isaac to investigate Adrienna's claim. 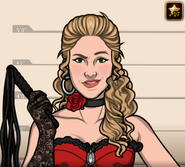 Adrienna, as she appeared in Eyes Wide Shut (Case #20 of Mysteries of the Past). 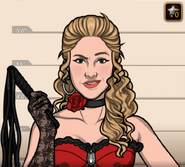 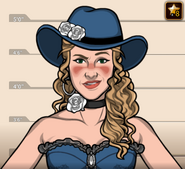 Adrienna, as she appeared in How the East Was Won (Case #30 of Mysteries of the Past). 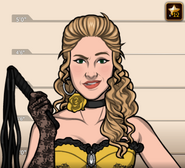 Adrienna, as she appeared in Civil Blood (Case #32 of Mysteries of the Past). 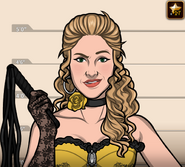 Adrienna, as she appeared in In Love and War (Case #36 of Mysteries of the Past). 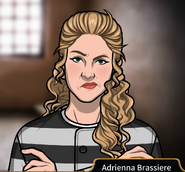 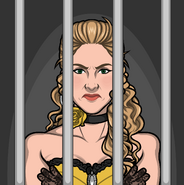 Adrienna, sentenced to life in prison for the murder of Seamus O'Neill. 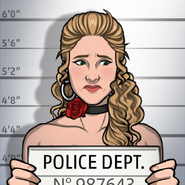 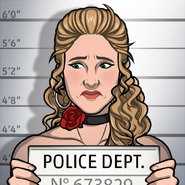 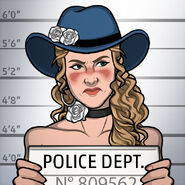 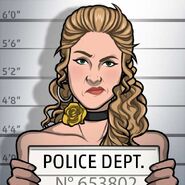 Retrieved from "https://criminalcasegame.fandom.com/wiki/Adrienna_Brassiere?oldid=516435"
Community content is available under CC-BY-SA unless otherwise noted.