Adrian Lynn was the killer of his brother, economics teaching assistant Gregory Lynn, in Trick or Treat (Case #41 of The Conspiracy).

Adrian is the 18-year-old brother of the victim. He has short, tousled brown hair and sports prosthetic ears. He wears an olive green hunter's jacket with gold glitter lining, silver buckles, and straps. Additionally, he carries a bow and quiver. It is known that Adrian uses a spirit board, has watched A Wind-Up Satsuma and drinks Corpse Revivers.

Adrian became a suspect after Gloria and the player learned that he was the victim's brother. After lamenting his brother's death, he informed the team that he had blended into the party and did not witness the murder. He then excused himself to inform his parents of the murder.

Adrian was spoken to again about the angry texts his brother had sent to him. He told them that he looked up to the victim, but had been accused of being obsessed with him by Gregory himself. He said that he had surprised the victim at the party, but had been humiliated when he was told to go back home.

In the end, it was proven that Adrian was Gregory's killer. Upon admitting to the murder, Adrian said that he was in love with Polly O'Brien, his brother's girlfriend. After Polly had rejected his declarations of love for her, Adrian decided to take more drastic measures, luring Gregory outside the house after everyone took the party to his bedroom and slicing him in half with a scythe he found in the farm he lived in. He then slipped a spirit board planchette into Gregory's mouth to pin the murder on costume shop owner Lily Chen. Judge Powell sentenced him to 37 years in prison with psychiatric counseling for the murder. 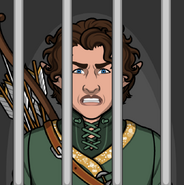 Adrian, sentenced to 37 years in prison with psychiatric counseling for the murder of Gregory Lynn. 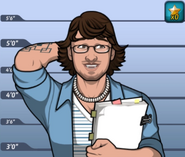 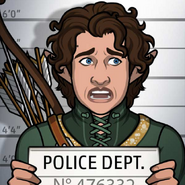 Retrieved from "https://criminalcasegame.fandom.com/wiki/Adrian_Lynn?oldid=518112"
Community content is available under CC-BY-SA unless otherwise noted.