Adela Zhu is a 61-year-old cleaning lady with curly gray hair wrapped by a scarlet bandana. She wears a turquoise shirt underneath a blue apron with a white and blue logo of the Grimsclean. She also wears salmon red lipstick, blue gloves, and a blue broom. It is known that Adela is in contact with beeswax.

Adela appeared when she wanted to talk to the team in the station. When asked what she wanted to say, Adela replied that she was the dead painter, Wilhelm Moss's housekeeper. She continued that she had just gone to her employer's workshop to clean it, as she did twice a week, but the police were not letting her enter, since it was a crime scene. The team then informed her that this was because her employer was no more. After hearing this, Adela was shocked and said that she had warned Wilhelm that evil things would happen if he worked on the painting of The Mad Pilgrim, but her employer would not pay any attention to her warnings.

Adela was later on called into the interrogation room by the team. When asked if Wilhelm would always keep the door locked while working in his workshop, Adela replied that her employer used to do that all the time. She further stated that Wilhelm was as suspicious as a rat, and that he had also devised a special knock that people had to follow, and if they wouldn't, he would not open the door. Adela thus concluded that Wilhelm had started to believe in the curse of The Mad Pilgrim painting, and as a result, the victim added some metal wire netting to the window of his workshop to stop the "ghost" of the Pilgrim from coming through the window. 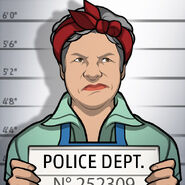 Retrieved from "https://criminalcasegame.fandom.com/wiki/Adela_Zhu?oldid=407970"
Community content is available under CC-BY-SA unless otherwise noted.