Adam Enstrom (1995–2019) was the killer of his creator, asylum doctor Dr Lucrezia Stein, in Mad World (Case #9 of Supernatural Investigations).

Adam was a 24-year-old manmade human and the assistant of the victim. He had blue eyes, short and wavy auburn hair as well as a scar across his forehead. He wore a sky blue shirt with a turquoise and faded white striped tie under a white lab coat. He sported a white and bronze Blackmoor Asylum nametag on his left lapel and carried two medical bottles in the right chest pocket of his lab coat. It is known that Adam ate gruel, was claustrophobic and played Link 4.

Adam became a suspect after Gwen and the player found his access badge. Assuming the guise of hospital inspectors, they informed Adam that Dr Stein had been murdered. Adam told the team that the staff would sometimes get attacked by unhinged patients, before revealing that he used to be a patient at the asylum before Dr Stein cured him and trained him to be her assistant. He then revealed that Dr Stein had made her round of the patients' dorm earlier that day, prompting Gwen and the player to search the dormitory.

Mid-investigation, Adam informed the team that asylum patient Greg Schmidt had escaped. Gwen and the player stopped Greg from escaping and allowed Adam to escort him back to the asylum.

Adam was spoken to again about Dr Stein threatening to turn him back into a patient. He revealed that Dr Stein used to bully and punish him. He told the team that while he owed her for making him healthy again, she did not have the right to treat him like dirt.

In the end, it was proven that Adam was Dr Stein's killer. He admitted that he was her creation, having been made from stitched up body parts of her previous patients, brought to life, and then mentored by Dr Stein until he was fit to be her assistant. Noting his creator's lack of empathy for her patients, he sedated her and commenced the trepanning process to cure her, accidentally killing her.

Later, conjoined twins Charity and Mercy informed the team that Adam was dead. At the asylum, Ben and the player found Adam dead from a self-inflicted drug overdose with a suicide note saying that he could not live with possessing the lives of Dr Stein's previous patients. The note detailed that Adam wished for the poem Mutability to be read at his eulogy. Later, the team arranged Adam's funeral, with patient Savannah Austin, Charity, and Mercy bidding him farewell and Ben reading the poem. 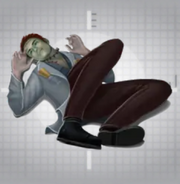 Adam's body being discovered after he committed suicide. 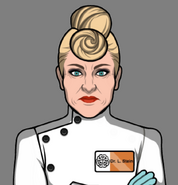 Retrieved from "https://criminalcasegame.fandom.com/wiki/Adam_Enstrom?oldid=536548"
Community content is available under CC-BY-SA unless otherwise noted.