Adaline Galls was a suspect in the murder investigation of her father, farmer Benjamin Galls, in Little Murder on the Prairie (Case #27 of Mysteries of the Past).

Adaline is the 13-year-old daughter of the victim. She has braided blonde hair and wears a pale yellow dress with grey dots. She is seen holding a bouquet of yellow, white flowers and lavender. It is known that Adaline drinks milk.

Adaline became a suspect after the player and Isaac found an award belonging to her on the crime scene. When they approached her, she said she was not expecting anyone and decided to call for her father. However, when given a description of the victim they found, Adaline confirmed it was one Benjamin Galls, her father. But unfortunately, she broke into tears once Isaac informed her that her father was killed. Given the victim lived on the farm, the player and Isaac decided to look around the house for more information about the victim.

Adaline was spoken to again about a drawing she made of her family, and her father was scribbled over. She said she scribbled her father out because she was mad at him for driving her mother away. All her father ever did was work, and soon enough her mother got sick of it and left. It made her especially sad since her father was now dead and her mother was gone that she was all alone.

Later on, Isaac and the player were informed that Adaline was threatening to shoot Charlie. Luckily, they managed to get there before things got out of hand and settled the whole situation. Charlie was just trying to help Adaline with milking the cows, but Isaac and the player ended up having to send Charlie off for the time being.

Adaline was found to be innocent after the team incarcerated Vinnie Costa for Benjamin's murder. Later, the player, Charlie and Maddie spoke with Adaline again, this time to convince her to try Charlie's milking device. Though at first she still wanted nothing to do with him, Charlie managed to convince her, especially considering he met the cow before. Once that was done, Adaline requested their help; she heard her father's killer had a puppy, and since Vinnie was now in jail she wanted to give him a home. Maddie and the player decided to check the shop, where Adaline claimed to hear barking from, so they investigated and brought the dog back to her. She thanked them for all their help, and Maddie assured her they would be more than happy to lend another hand if they need any more assistance with anything. 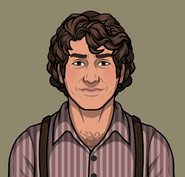 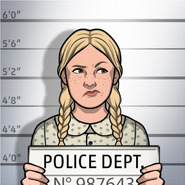 Retrieved from "https://criminalcasegame.fandom.com/wiki/Adaline_Galls?oldid=415382"
Community content is available under CC-BY-SA unless otherwise noted.