Abigail Walcott was a suspect in the murder investigation of herbalist Aubrey Miller in The Witching Hour (Case #43 of Mysteries of the Past).

Abigail is the 20-year-old apprentice of the victim. She has curly black hair adorned with a black hair decoration. She wears a wine red bodice with silver buckles over a cream blouse. Additionally, she wears a brown choker, red nail polish and a ring with a green jewel on her right middle finger. It is known that Abigail knows how to tie knots, reads Malleus Maleficarum and uses hazel water.

Abigail became a suspect after Maddie and the player discovered that she defaced the victim's sign and wrote "WITCH" on it. Excited by Aubrey's death, she revealed that she defaced the sign because she knew that the victim was a witch. She said that she was the victim's apprentice, and that one night, she followed her to the pond where she saw the victim drinking babies' blood, summoning demons and flying on a broomstick. Maddie then dismissed her claims, saying she had a very active imagination.

Abigail was spoken to again about her affair with the victim's husband, William Miller. She confessed to the affair, saying she had no regrets. She said that everything had gone well between the two until the victim caught them and threatened to tell the entire town. To discredit her, she told everyone that Aubrey was a witch, confessing to being the source of the rumor. To convince everyone, she acted as if the victim had poisoned her and started a fervor for the Malleus Maleficarum.

Abigail was found to be innocent after the team incarcerated Cordelia Putnam for Aubrey's murder. 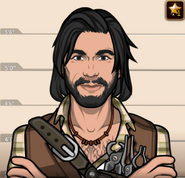 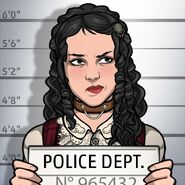 Retrieved from "https://criminalcasegame.fandom.com/wiki/Abigail_Walcott?oldid=499013"
Community content is available under CC-BY-SA unless otherwise noted.