Abigail Simandl was a suspect in the murder investigation of socialite Philomena Highmore in The Talking Dead (Case #8 of Mysteries of the Past).

Abigail is the 39-year-old head curator at the Concordia Museum of Art. She has neat and fixed black hair. She wears a long-sleeved lavender and plum robe with a white collar and gold studs, a crow skull, and gold earrings. It is known that Abigail takes laudanum, supports the woman's vote and uses spirit boards.

Abigail became a suspect because of her presence at the crime scene. There, she showed clear disdain at the staging of Philomena on a Bernini statue. She regarded the victim negatively and was mostly concerned about the respectability of the museum after the murder, saying that it would attract many tourists. Maddie said that this would be a good thing, to which Abigail disagreed.

Abigail was spoken to again regarding the woman's suffrage booklet that had the victim's name crossed out and a stamp bearing Abigail's name. Abigail said that Philomena was unfit to be a part of the cause due to her excessive drinking and her behavior.

Abigail was found innocent after Ignatius Cottingley was incarcerated for Philomena's murder. 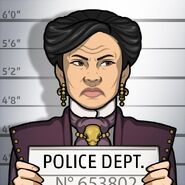 Retrieved from "https://criminalcasegame.fandom.com/wiki/Abigail_Simandl?oldid=423725"
Community content is available under CC-BY-SA unless otherwise noted.