Abigail was Justin Lawson's fiancée. She had brown hair braided to the side and blue eyes. She was shown wearing a long-sleeved azure dress with white ruffles.

Abigail was first mentioned when Maddie and the player found her obituary in Justin's wallet. Per Evie, Abigail had been killed by robbers two days before her wedding with Justin, after picking her wedding gown. According to Justin, the robbers were caught but received a light sentence. Abigail's death and the lack of justice in Concordia prompted Justin to become an attorney and do his best to get justice properly served in the city.

Evie discovered the identities of Abigail's killers during Fiona Flanagan's murder investigation, after the team found a pair of bracelets in her hideout. Their names were Bart McMullen and Tony Fletcher, both of whom were members of the Flanagan gang. When the team talked to Justin about it, he was still heartbroken over his fiancée's death and wanted to leave it in the past. 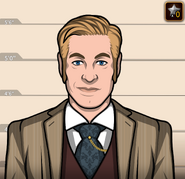 Retrieved from "https://criminalcasegame.fandom.com/wiki/Abigail_Baines?oldid=407960"
Community content is available under CC-BY-SA unless otherwise noted.