Abby Lee (Krn: 이아비) was a suspect in the murder investigation of Deputy Sheriff Gus McGuff in Fields of Murder (Case #43 of The Conspiracy).

Abby is a 37-year-old chicken farmer in Spring Fields. She has brown eyes and neck-length black hair under a beige straw cowboy hat, which is decorated with a sunflower. She wears a blue overalls over a yellow checkered shirt. Additionally, she is carrying her hen named Minnie in her arms. It is known that Abby rides horses, chews nicotine gum and reads The Almanac.

Abby became a suspect after Gloria and the player found an egg carton that she had gifted to the victim. After being told about Gus' murder, Abby was in shock, saying that Gus had been a great guy who always looked after everyone in Spring Fields. Abby rushed back to her chicken coop as the fire was still raging.

Later, Abby was interrogated again about the poison box that the victim had confiscated from her. After being questioned about the poison, Abby told the team that Gus had accused her of poisoning her neighbor's chickens. Branding the claim silly, Abby then claimed that she was the best neighbor in the whole district. At the end of the conversation, Abby denied killing Gus.

Abby was found to be innocent after the team incarcerated Cody Mays for Gus' murder. After the arrest, Gloria and the player returned to talk to Abby about the visits she had received from GrimFoods and AgriMeadows, the biggest agribusinesses in Spring Fields. She told them that she had not talked to the companies as she had shooed them away, but she told the team to attend the cattle fair where both companies were to hold exhibitions if they wanted to know more about them. Abby then thanked the team for their help on behalf of the farmers of Spring Fields. 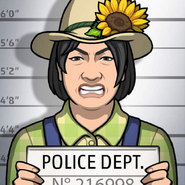 Retrieved from "https://criminalcasegame.fandom.com/wiki/Abby_Lee?oldid=480430"
Community content is available under CC-BY-SA unless otherwise noted.