Abbi Absinthe was a suspect in the murder investigation of actress Felicia Steppingstone in The Young and the Lifeless (Case #31 of Pacific Bay).

Abbi is a 22-year-old reality television star primarily operating in Ivywood Hills. She has brown hair and blue eyes. Abbi dons a gray dress, and she wears golden earrings, a gold necklace and a gold bracelet on her right wrist. She also carries her chihuahua in her left arm, which wears a yellow shawl with pink polka dots. It is known that Abbi drinks protein shakes, drives a convertible and uses teeth whitener.

Abbi found herself in the red after Frank and the player found a "BFF" star featuring Felicia and a blurred woman, who turned out to be Abbi thanks to the player's image-matching software from the police database. Frank recognized Abbi as a reality TV star like Felicia, realizing he and the player needed to inform her about Felicia's death.

Abbi was not in any power to cry, something which Frank found very odd—prompting the reality star to inform the team about a fashion statement in which she had to avoid crying. Abbi told Frank and the player that Felicia became successful thanks to her, since Abbi introduced the young actress to the clubs, auditions, the apparatus Felicia required to become famous. Abbi said that Felicia was the only person she trusted given just about everyone in Ivywood would be jealous of her all the time.

Abbi would be due for a second conversation when Frank and the player found a poster promoting Felicia's The Pretty Simple Life television show (during their second trip at the Imperial Theater); Frank was quick enough to deduce Abbi's writing on the poster. The writing suggested that the friendship between Abbi and Felicia took an ugly turn, so the conversation was meant to be.

Frank told Abbi that her friendship with Felicia was an act, something which the reality star did not take very well. Frank further told Abbi to talk since she was currently a suspect in Felicia's murder, to which Abbi replied that the victim deserved to be hit. Abbi once told Felicia about an audition she tried out for, but the latter went behind Abbi's back, auditioned for the part, and nabbed it, angering Abbi. Felicia did not apologize to Abbi for stealing the part from her. Furthermore, the TV show was consuming so much of Felicia's time that she stopped calling Abbi, even going far by failing to invite her to the pool party. This statement pretty much explained why the friendship took a wrong turn.

Abbi was found innocent after an ulterior motive was exposed as the driving reason for murder, but became a victim of unlawful arrest when Russell incarcerated her after her lipstick was found at the Imperial Theater when Chief Marquez told the team to subdue a theft incident at the theater. However, the player sensed Abbi's psychological reaction and deduced thus that her lipstick being found at the theater was not plausible evidence of such break-in.

So, the player made an audit with Frank and found skin cells on a film reel case. The player then took a sample for Yann to analyze, and after careful examination, Reggie Perez was incriminated as the one who stole the film from the reel at the theater. The player then arrested Reggie, but also made Russell apologize to Abbi for the false arrest. The player was not too pleased about Russell's false arrest, thus informing Chief Marquez about it—prompting the Chief to inform the psychologist that the next false arrest would be grounds for suspension from the force. 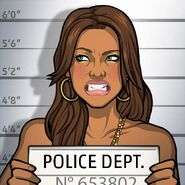 Retrieved from "https://criminalcasegame.fandom.com/wiki/Abbi_Absinthe?oldid=407956"
Community content is available under CC-BY-SA unless otherwise noted.