Aaron Seabrook was a suspect in the murder investigation of his wife, housewife Elaine Seabrook, in Hell Is Other People (Case #2 of The Conspiracy).

Aaron is the 42-year-old husband of the victim. He has brown hair, green eyes and wears a pair of red sunglasses over his head. He also wears a purple t-shirt with a blue scarf around his neck. It is known that Aaron eats steak, drives an SUV and likes gardening.

Aaron called the police after discovering his wife murdered outside their home. Disbelieving that such a ghastly thing would occur in a quiet neighborhood, Aaron told Gloria and the player that they had moved to a new neighborhood after he landed a new job. Elaine then gave up work to handle things around the house. He said that they barely had any time to make friends or enemies.

Later, the team found Ramirez's film negatives of Elaine. Ramirez said that Aaron had hired him to find proof of her infidelity so he could file for divorce without losing any assets. He also said that Elaine was sleeping with several men. Aaron said that he did not want a divorce because of her infidelity, but because she kept spending his money on various luxuries to keep up with the Joneses. Not wanting to lose money so quickly, Aaron wanted to divorce Elaine as soon as possible.

Despite their relationship troubles, Aaron was found innocent when Cynthia Lane was found guilty of Elaine's murder. 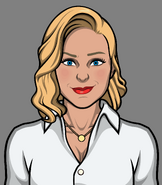 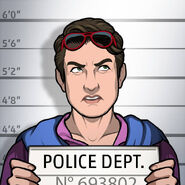 Retrieved from "https://criminalcasegame.fandom.com/wiki/Aaron_Seabrook?oldid=407964"
Community content is available under CC-BY-SA unless otherwise noted.