A Tudor Murder is a case featured in Criminal Case as the eleventh case of Travel in Time (Season 6) and the three-hundred second case overall. It is the first case to take place in Renaissance.

Landing in 1515 London, England, Nebet and the player dressed up as Swiss Guards and traced a scream to a peasant, who told the team that there was a murder in the royal palace's throne room. They then headed to the palace, only to find the body of Queen Catherine of Aragon with half her face torn off eighteen years before her historically accurate death.

While convening in Houndsditch Passage, the team were approached by beggar Dudley, who said he had info on the Queen. Later, a group of peasants rioted against King Henry VIII, suspecting him of killing his wife. The team then found Mangy Lion tavern owner Agnes Manners guilty of the murder.

Agnes admitted that she overheard French musketeer Alexandre Devereaux discussing the possibility of a truce in the Franco-English war with Queen Catherine. Agnes felt betrayed, as she had already lost two sons in the war. Thus, on her hot cross bun delivery to the Queen, Agnes grabbed a morning star mace and bashed Catherine in the head, despite Catherine actually denying the truce agreement. King Henry had Agnes thrown into the dungeon until he could decide on her real punishment.

Post-arrest, Penelope and the player talked with Devereaux regarding Leonardo da Vinci's whereabouts. Devereaux said that Da Vinci never showed up in his appointment with King Francis I scheduled two months prior and that the King suspected English meddling. Devereaux suggested the team intercept the King's communication with his spies. The team then found a carrier pigeon with a message that (per Orlando) showed that Da Vinci had been arrested by the Spanish Inquisition, proving that history had been altered to the point of no return. They then informed Devereaux of their findings.

Meanwhile, Nebet and the player restocked the team's food supply and freed Dudley from his imprisonment in the stocks. The team then rushed to Spain to save Da Vinci from the Inquisition.

Agnes Manners
Add a photo to this gallery 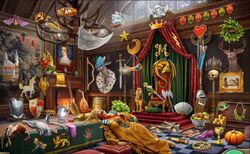 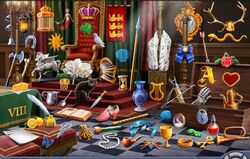 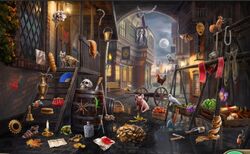 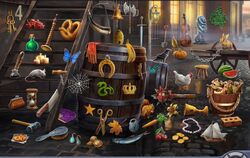 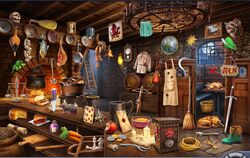 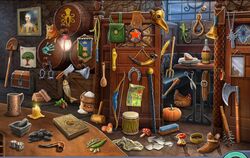 Tavern Booth
Add a photo to this gallery

Start a Discussion Discussions about A Tudor Murder